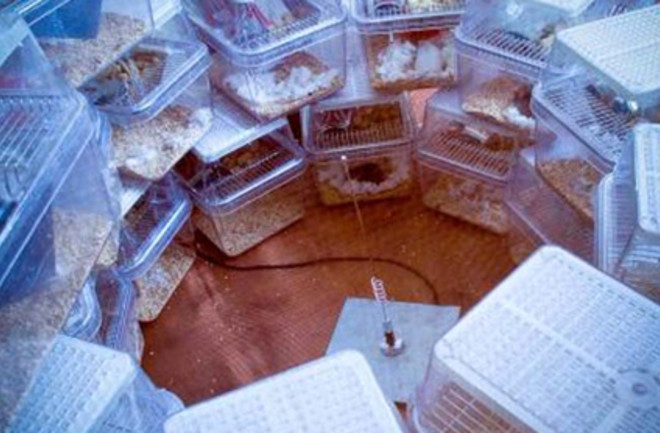 Back and forth go the studies investigating whether cell phone uses increases the risk of brain cancer (the latest one to get major press, released last month, found nothing there). This week, though, new research has grabbed the headlines by declaring that our ubiquitous communication and time-wasting devices could actually provide a health benefit. In a study set to come out today in the Journal of Alzheimer's Disease (and funded in part by the National Institute on Aging), a group led by Gary Arendash argues that the radiation from cell phones that we've been worrying about could protect against Alzheimer's Disease. But it's far too soon to advise people to start medicating themselves by talking even longer on the phone.

Researchers at the Florida Alzheimer’s Disease Research Center arranged about 70 mouse cages in a circle around a central antenna that emitted electromagnetic waves typical of what would emanate from a phone pressed to a human head. They were exposed to the radiation for two hours a day over seven to nine months. About two dozen other mice served as controls [Los Angeles Times]

. Arendash's team used mice they had genetically engineered to develop the brain buildups and memory problems typical of Alzheimer's when they got older. The team says that the memory problems of those mice exposed to the radiation began to disappear during the study. Not only that, but normal mice (that hadn't been genetically engineered) also showed memory improvements after exposure. Why?

The researchers showed that exposing old Alzheimer's mice to the electromagnetic waves generated by cell phones erased brain deposits of beta-amyloid, a protein strongly associated with Alzheimer's disease. Clumps of beta-amyloid form so-called brain plaques that are a hallmark of the disease [LiveScience]

. According to the scientists, the slight increase in brain temperature brought on by the radiation could've caused the mouse brains to release those plaques. Arendash surprised himself, saying that before the study he'd expected to see that cell phone use would make dementia worse.

Glowing from success, Arendash and USF colleagues said future research could determine the best "dosage" of radiation for targeting these brain plaque deposits:

. When the benefits for the mice continued without any noticeable detriments, he was sold.

the 918 megaHerz in US mobile phones, 800 megaHerz in European phones, or another frequency -- and how long effective "treatment" would have to be [AFP]

. Let's not get ahead of ourselves here, though. The work by Arendash opens up all kinds of avenues for possible research, but research on the health effects of cell phones seems prone to long, drawn out studies and occasionally contradictory headlines, like those we see about red wine or coffee being good or bad. William Thies, chief medical and scientific officer of the Alzheimer's Association, warned against self-medicating with extra cell use based on these findings. (And just yesterday we covered the scientist smackdown over whether a virus truly causes chronic fatigue syndrome, with the British researchers now arguing that the link isn't proven, and warning people not to seek out antiretroviral drugs.) The next steps: Other researchers will try to replicate Arendash results in mice, and if they do so, scientists can go on to test whether electromagnetic waves have the same effect on humans. Related Content: 80beats: Can You Fear Me Now? Cell Phone Use Not Linked to Brain Cancer 80beats: Cancer Doctor Issues Warning About Cell Phones, And Causes Panic 80beats: Scientist Smackdown: Is a Virus Really the Cause of Chronic Fatigue Syndrome? 80beats: Lack of ZZZZs Linked to Alzheimer's in Mice 80beats: Electrical Brain Stimulation Prompts Big Hopes—And a Dash of Concern