"StunRay," a Light Weapon That Overstimulates the Brain 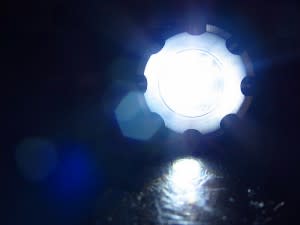 After a long search, you've found your Person of Interest---and he's making it abundantly clear that, while you were hoping for a civilized chat back at the station, he makes it clear he doesn't like the ambiance there. You don't want to shoot, you're too far away to use your Taser, and it's not like you walk around with a spare tear gas canister hanging from your belt. What's a law enforcement officer to do? That's where the StunRay comes in. A non-lethal, spotlight-like weapon, this new device is designed to disorient its targets with by overloading their neural circuitry with a burst of high-intensity light. Genesis Illumination, which makes the device, patented it in January. (You can see the device in action in this video put out by Genesis.) Inside the StunRay is a 75-watt lamp which, after optics focus the light, produces a beam "10 times more intense than an aircraft landing light." That's a whole lot more light than the nervous system is used to processing. It allegedly overloads the neural circuits connected to the retina, essentially using the light to flood the brain---and incapacitate the target, from distances of up to 150 feet. The effects are reportedly only temporary, generally lasting anywhere from "seconds to twenty minutes," Todd Eisenberg, the StunRay's inventor, told Scientific American. Genesis Illumination's goal was to use light "to safely disable and disorient." Guns, of course, can cause permanent injury, and even Tasers can pose serious safety risks. In comparison, the StunRay seems relatively safe. The information about the device, however, comes directly from Genesis, which obviously has a stake in the device, and the mechanism and effectiveness haven't been externally verified. The StunRay isn't the first weapon to disorient targets with a bright beam. Dazzlers, as these weapons are known, were used by the British back in the 1980's, and the Department of Defense has developed StunRay-like weapons of its own. Image: Flickr / Theoddnote