Carbon nanotubes allow wires to be stretched and released thousands of times without disrupting the current. 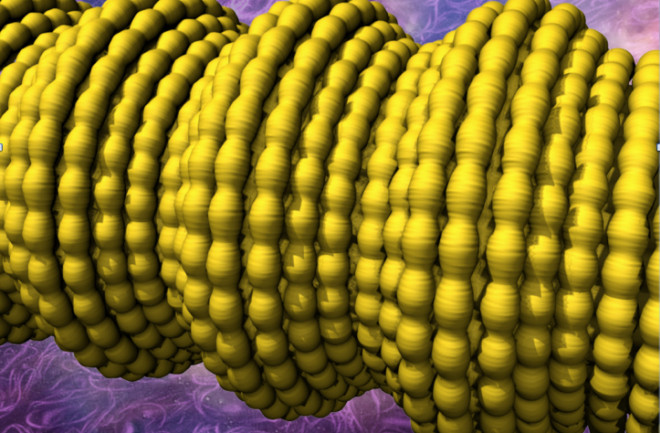 From health monitoring sensors woven into clothing to pacemaker leads that never wear out, stretchable electronics could usher in a new era of wearable tech. But finding superflexible alternatives to metal wires and semiconducting chips has been a challenge. In July, researchers announced a solution. They had built elastic wires that can withstand both extreme strain and thousands of stretch-andrelease cycles.

In previous attempts at making elastic conductors, researchers embedded conductive metallic particles into an elastic insulator, but stretching the material would cause breaks in the conducting path. These new wires can expand to 10 times their original length without choking off the current.

Materials scientist Ray Baughman and his team at the University of Texas at Dallas wrapped a sheet of conducting carbon nanotubes many times around a stretched rubber fiber, with the final product resembling a hair tie. When relaxed, the fiber core and nanotube sheath shrink together, causing the sheath to buckle like an accordion. The researchers found that as long as adjacent buckles don’t touch, a current running through the sheath holds steady as the wire is stretched and relaxed.

Going a step further, the team added a rubber coating and a second nanotube sheath to the original wire to create an electrically activated “muscle” that contracts when connected to a battery.