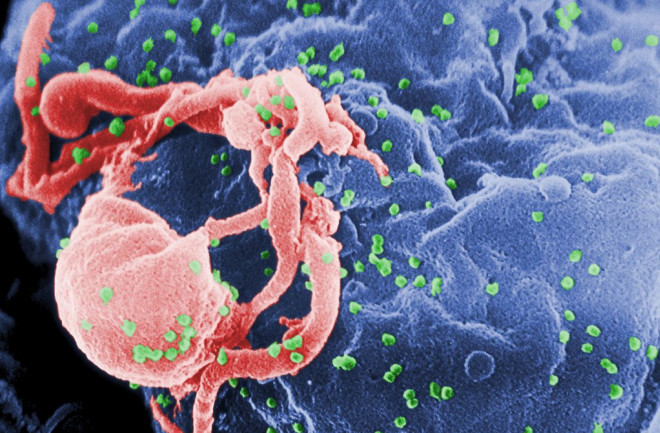 Scanning electron micrograph of HIV-1 budding (in green) from cultured lymphocyte. Credit: Centers for Disease Control and Prevention A new device uses magnetism to rid the bloodstream of pathogens that are the source of deadly infections. Bioengineers at Harvard’s Wyss Institute have developed a blood filter that quickly grabs toxins, such as E.coli or Ebola, from the bloodstream using protein-coated nanobeads and magnets. In early tests, the biomechanical treatment removed more than 90 percent of toxins from infected human blood within a few hours.

When our immune system fights an infection, the dying virus releases toxins into the bloodstream that can cause sepsis, a life-threatening immune response. Doctors can’t always pinpoint the specific pathogen that causes sepsis, so they use antibiotics to carpet-bomb the bloodstream, a strategy that’s not always effective and can lead to drug-resistance. The new device, dubbed an "artificial spleen," instead mechanically clears pathogens from the bloodstream, thereby reducing reliance on heavy doses of antibiotics. Its trick lies in magnetic nanobeads coated with a modified human protein. This protein binds to sugar molecules on the surfaces of more than 90 different bacteria, viruses and fungi, as well as to the toxins released by dead bacteria. When those nanobeads are mixed with infected blood they adhere to pathogens, and then, as the blood passes through channels inside the device, magnets pull out the beads with pathogens attached. Clean blood is routed back into the patient.

Putting it to the Test

Scientists tested their device by infecting rats with lethal doses of either Escherichia coli or Staphylococcus aureus and then cleaning their blood. The device removed more than 90 percent of the bacteria from the rats’ bloodstream within the first hour of treatment. After five hours, 89 percent of the rats with filtered blood survived, but only 14 percent of the untreated rats lived. Researchers then tested their device by cleaning 5 liters of human blood spiked with a variety of pathogens. The device cleared blood at a rate of 1 liter per hour, and again removed over 90 percent of the pathogens. Several devices could be linked together to speed up the rate of filtration in humans. The team published their findings Sunday in the journal Nature Medicine.

The next step for researchers is to test their device in pigs, after which human trials could begin within a couple years, Naturereports. Researchers say that the blood filter could someday play a role in treating HIV and Ebola by lowering the level of the virus in the blood to manageable levels. The device could also help scientists harvest viruses from the blood to study better ways to treat them. In an era of increasing antibiotic resistance, we'll take all the ingenuity we can get.