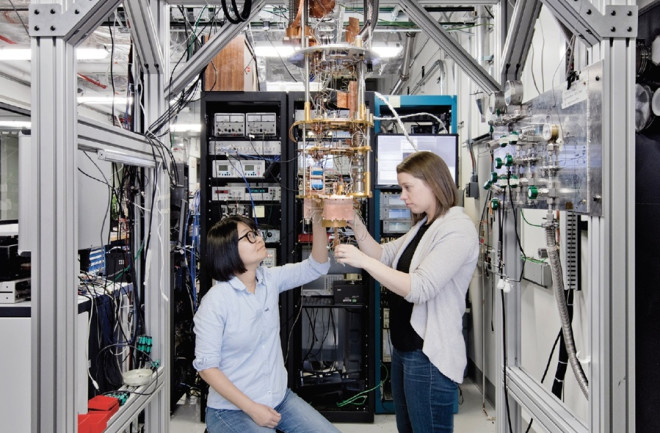 Computing scientists at IBM (above) and elsewhere are working on achieving “quantum supremacy,” when computers based on quantum processes will outdo traditional machines. CONNIE ZHOU/IBM

Tech experts have long championed quantum computers as the next generation of machine, promising to solve big problems in lightning-fast time, but the delicate chips exist in only a handful of labs. In the race to build the largest one yet, Google shot ahead in March when it unveiled Bristlecone, a 72-qubit device with low error rates. The previous record holder was a 50-qubit IBM machine.

Qubits do for quantum computers what bits, usually stored on transistors, do for classical computers: They carry out computations and store information. But unlike traditional bits, which can take one of two values (on/off, or 1 or 0), qubits can exist in a combination of two states at the same time, allowing for greater digital brainpower. The more qubits, in theory, the more powerful a quantum computer becomes.

“Google’s experiments are guiding the field of quantum problem-solving,” says computer scientist Wim van Dam of the University of California, Santa Barbara. “This is the story in everybody’s mind.”

That’s because Bristlecone is a milestone on the road to “quantum supremacy,” the point when a quantum machine can best a classical one in a useful task. We’re close: Right now, Bristlecone can solve specific problems a billion times faster than a classical computer, but those specific computations aren’t necessarily useful. They’re typically just test programs to show the machine works, according to physicist and Bristlecone chief architect John Martinis.

Quantum supremacy has loomed for decades, but reaching it has become more urgent, partly thanks to the end of Moore’s law. Fifty-three years ago, IBM computer scientist Gordon Moore accurately predicted that processing speeds for silicon-based transistors would double every two years, as more transistors were crammed on smaller chips — doubling computers’ power each time. But there’s a natural limit: Ever-tinier components eventually leave behind the predictable everyday world and enter the unpredictable realm of quantum mechanics. Some estimates say the pace of Moore’s law can last only a few more years, but such doomsday predictions are regularly stayed by new technologies. A quantum-based extension could be another tool.

The end of Moore’s law also poses a roadblock for artificial intelligence research, which requires gargantuan processing power for smarter applications like fully autonomous vehicles. The answer here may also be quantum computing, which some experts predict could revolutionize machine learning. To bring on the AI-QC merger faster, big companies like Google, IBM and Microsoft are investing big bucks.