That suspicious-looking package might be a terrorist bomb. In years past, police officers would have put their lives at risk to remove the explosive. More recently, robots have made the job safer, but they remain awkward, remote-controlled machines. Roboticist Phil Bennett and his teammates at Sandia National Laboratories have gone a step beyond with software that lets the robot perform a lot more actions on its own. 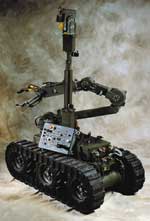 The software, called SMART, helps run commonly used bomb-removal robots such as the REMOTEC Wolverine (below). SMART allows an operator to preprogram a series of complex actions: Show Wolverine once how to pick up a tool and it will forever after be able to perform that action at the press of a button. Tell the robot to move left and it will do so, even if its arm-mounted video camera has flipped upside down. Draw a line over an object on a video monitor showing Wolverine's surroundings and the robot automatically figures out how to pick up the object. In one test, remote operators ordered a SMART-enhanced robot to open the driver's-side door of a car, pop the hood, search the glove box, open the back door to retrieve a package, and open the trunk with a key. Normally such a routine would take two to four hours; the brainy robot did it in 20 minutes. Commercial robots utilizing these SMART software enhancements should be available within a year.