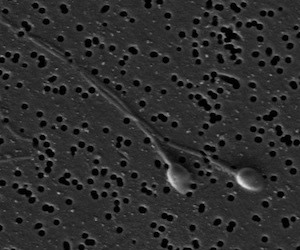 How does a sperm swim? While microscopes have captured the images of plenty of sperm before, it's tough to track the motion of these wriggling cells in three dimensions. So scientists devised a new imaging method

. They hit a sample of about 1,500 sperm with two different colored light sources oriented at a 45-degree angle. The different colors cast different shadows when they hit the cells, which allowed the researchers to reconstruct each sperm's motion. So, what did we learn from tracking sperm? It turns out that about four to five percent of sperm swim in helices, spiraling around anywhere from 3 to 20 times per second. And much like a certain really, really, ridiculously good-looking male model

, about 90 percent of these the malfunctioning sperm don't turn left, forever tracing only right-handed spirals. http://www.youtube.com/watch?v=DLRqyV7Wn04&t=0m32s While it's certainly interesting to know how sperm move in three dimensions, this is hardly earth-shaking news. But the method that these researchers pioneered has other applications. It could be used to observe a wide variety of microorganisms in motion, helping us to understand the mechanics of many other tiny swimmers.