Spiders, Apparently Concerned About Nutrition, Eat Ants From the Head Down 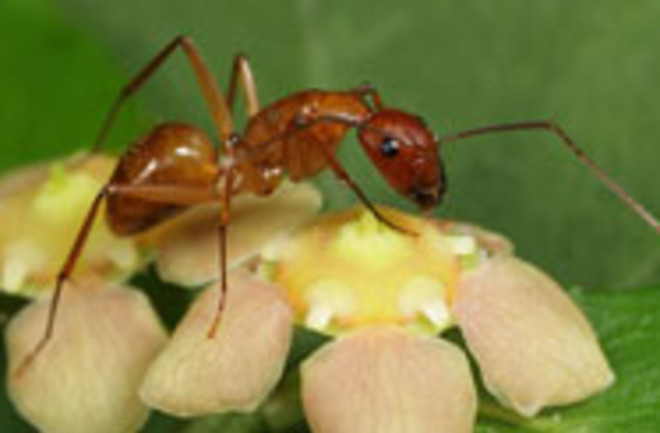 Life is uncertain--eat the head first. That's the philosophy behind every meal a Zodarian spider eats, and there's a strategy behind it. Consuming certain body parts first ensures the spiders consume the maximum concentration of vital nutrients during the meal, according to research published in the journal Animal Behavior. LiveScience reports:

"When chowing down on ants, the spiders consistently began with the protein-packed front parts before getting to the fattier hind segment, called a gaster or abdomen. The picky eating seemed to pay off: Spiders reared on just front-end ant pieces grew faster and bigger, and they lived longer than those served only gasters or even whole ants."

Of course, the spiders can't sit down to dinner until they've injected their prey with a fearful venom that leaves the ants completely paralyzed in a matter of minutes. Then it's time to liquefy the ants' inside and slurp up the yummy goo. But the ants' hind parts don't go totally to waste; when given an entire ant to eat, the spiders would eat some of that, too, perhaps because certain nutrients are found chiefly in the gaster.

The findings jibe with the emerging view that for predators, achieving proper nutrition is trickier than simply finding enough prey to eat. And what's true for persnickety spiders might also apply to nature's big, "generalist" carnivores.

Guess that means Mom was right: Even gasters can be part of a balanced diet.