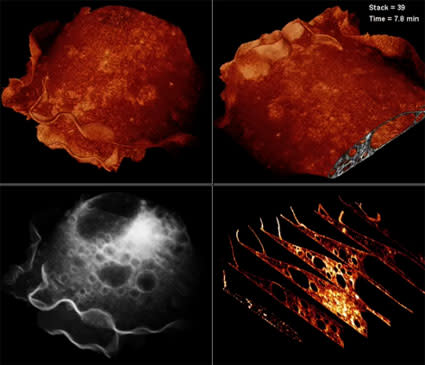 From the perspective of a kidney cell, light is a toxic substance: It spends its life hidden under layers of skin and guts, far away from any kind of intense illumination. As a result, biologists using microscopes to study kidney cells and other living cells are always racing the clock—the very light required to see the cell will also kill it. But light toxicity is no longer an issue with the invention of a new microscope that uses focused sheets of light to create 3-D movies of living cells. The technique is called Bessel beam plane illumination microscopy, and it works by shooting thin planes of light toward the side of a cell, illuminating the specific plane the microscope is focusing on, instead of drowning the entire cell in top-down light.

"We have for the first time a technology that allows you to look at the three-dimensional complexity of what's going on, at the sort of rates at which things happen within cells," Dr [Eric] Betzig [the Howard Hughes Medical Institute (HHMI) physicist who led the research] said. [BBC]

In the past, many imaging techniques worked only with dead cells.

"You can get a lot of information looking at fixed, dead cells - high-resolution information - but you'd still like to be able to see dynamics," he told BBC News. "There's a lot you can learn from actually watching things wiggle around." [BBC]

When studying living cells, the major problem is that the microscope's light covers even the out-of-focus parts of the cell---the parts you're not even looking at. And this all-encompassing light not only heats up the organism, but also dries out the wet mount encasing it, causing the organism to "eventually ... literally curl up and die," Betzig told Popular Science. Cells cannot stand the added heat and the lack of water. Not only do large swaths of light cause more damage to body cells---which have evolved to function without the onslaught of direct light---but it also causes blurred images because the light in the unfocused areas causes scatter. And to make matters worse, this light causes the very thing you're looking at, the proteins labeled with fluorescent markers, to dim and eventually go out. "The question was," as Betzig says, "is there a way of minimizing the amount of damage you're doing so that you can then study cells in a physiological manner while also studying them at high spatial and temporal resolution for a long time?" The first step toward an answer came in 2003, when a group of European scientists used a plane illumination microscope to show the live-action development of an embryo. Embryos, though, are hundreds of micrometers in diameter, Betzig says, and this technique caused too much scatter to be used on single cells, which have diameters on the order of tens of microns; even so, it still illuminated too much of the cell, causing damage. As outlined in their Nature Methods report, the light's harmful effects are minimized when using Bessel beams, a non-diffracting kind of light (similar to the light in grocery store scanners) that is exceptionally thin: It is composed of a strong, narrow central beam of light surrounded by weaker concentric circles. Instead of shooting light from below and through the entire organism into the microscope, this light is shot in precise beams on the side of the organism, at the exact plane on which the microscope is focusing, and when the light hits the area in the cell the scientists want to focus on, it bounces off the cell and enters the microscope's lens. "Because you come from the side, plane illumination confines the excitation much closer to the part that's in focus," Betzig says in his press release. This means that less of the cell is exposed to the hazardous heat of direct light. While the Bessel beam has a relatively narrow beam, there's still some spread to the it, and the "extra" light outside the desired beam causes a little bit of scatter. The heating caused by this collateral light is minimized by turning the beam on and off as it images a sample, like a series of ultra-fast photographs weaved together to create a movie. The system takes nearly 200 images/second and creates 3-D images in as little as one second. http://www.youtube.com/watch?v=NBTeYWFOsdg&feature=related This new technique improves the level of detail by more than a factor of three compared with old techniques, but the researchers' say they can do still better by combining the pulsing Bessel beam technique with higher-resolution microscopy. From live-action films of mitosis to the workings of individual organelles, the future of cellular imaging is a wriggling mass of 3-D footage. Related Content: DISCOVER: Brain-Saving, Mind-Blowing, Hi-Tech Medical Imaging DISCOVER: The Great Leap Forward in Space Imaging 80beats: FMRI Brain Scans May Peer Into the Brain's Future 80beats: Studying Biology in Real-Time, and In Situ, With a Fluorescent Beacon