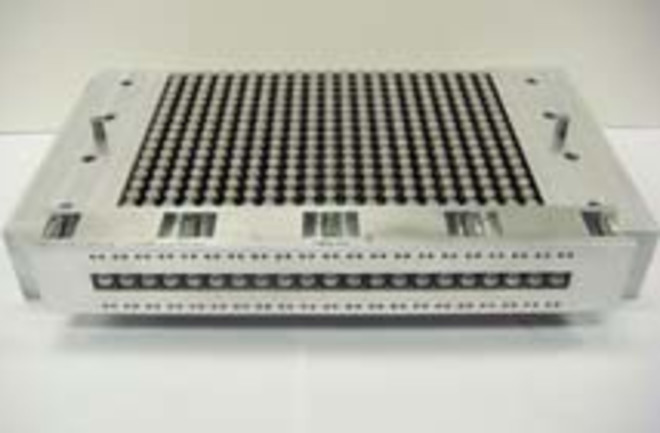 Doctors already use concentrated sound waves to see through solid tissue and take a look inside the body, as with ultrasound scans. But in this week's Proceedings of the National Academy of Sciences, Caltech scientists say they've developed a metamaterial that focuses sound to such a high concentration that it could go on the offensive, targeting cancers or kidney stones while leaving the surrounding tissues alone. Oh, and one other thing: The military could use it to make weapons.

"The beauty of this system is that it's just a bunch of ball bearings that we control with weights," said Chiara Daraio [Discovery News]

, a member of the research team. Caltech's acoustic lens relies on the same principle as Newton's cradle—that toy your high school science teacher probably kept on his or her desk with metal balls on strings that demonstrated the conservation of energy. In this design, 21 parallel chains each contain 21 bearings. When the team strikes one end, it starts a compression wave that carries through the system. But instead of having the last ball swing out like a pendulum and bring the momentum back into the system, like the toy does, the acoustic lens focuses all the energy at the end of the system onto one spot, just a few inches away from the metamaterial. Researcher Alessandro Spadoni says the team had medical uses in mind when they designed this acoustic lens.

"In particular, tissue temperature at the focal point can be increased with high acoustic-energy density, which results from a compact focal volume and high pressure induced by sound bullets," Spadoni adds [Scientific American]

. Thus, he says, you could potentially target and heat up cancerous tissue without affecting surrounding healthy tissue. Or, if they modulated the system a different way, the researchers say it could be used to see inside the body without the possible risks related to radiation-based imaging. The paper also hints at use in defense systems, though it leaves the implications of that to the imaginations of others.

. The Caltech scientists are far from the first to tinker with acoustic lenses, but the simplicity of their design makes it appealing. The research model currently works in two dimensions and hasn't been tested on living cells. But, researchers says, scaling up to 3D could focus sound waves even better, and the applications of such a technology will depend on how much sound wave intensity the team can focus into one spot. Related Content: 80beats: New Laytex & Plastic Soundproofing Could Stop Even Rumbling Bass Sound 80beats: This May Sound Strange: Sonic Lasers and Sonic Black Holes 80beats: The 3D Invisibility Cloak: It's Real, But It's Really TinyImage: PNAS