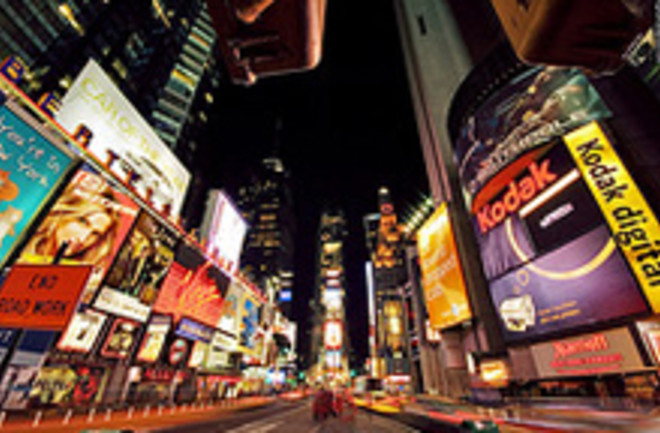 It's hard not to be impressed with the grandeur of Times Square—unless you're especially conscious of saving energy, in which case all those illuminated signs might force upon you the mental image of polluting power plants working overtime to keep the light show going. If that's the case, it might make you feel better to know that a greener electronic billboard is coming to New York. By the time the ball drops this New Year's Eve, Times Square may have its first solar and wind-powered billboard. Ricoh, a Japan-based electronics company, plans to install a 47-by-126-foot sign featuring their logo at the intersection of 42nd Street and 7th Avenue in December. Forty-five solar panels on site will power the Ricoh sign, and just in case the clouds roll over, four wind turbines will be available, too. And if a cloudy and windless day comes along...well, the sign will just stay off. OK, a darkened billboard isn't terribly glamorous, but the company says that using exclusively solar and wind power will reduce carbon dioxide emissions by 18 tons. Just think about that when you're trying to make out the letters in "Ricoh."