So Just How Fast Can a Motorized Bar Stool Go? 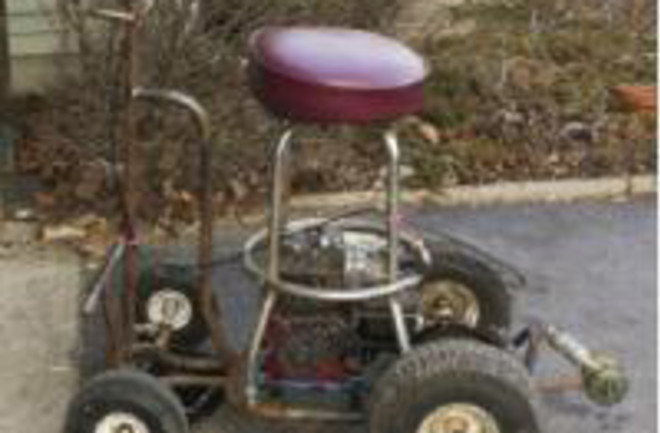 Ohio resident Kile Wygle certainly gets points for creativity. He not only converted an old lawnmower into a motorized bar stool, but also drove it drunk, attempting to avoid the associated charges by saying he was driving a bar stool—not a vehicle. But under state law, unfortunately for him, operating any motorized vehicle except for wheelchairs and mobility scooters is prohibited while under the influence of drugs or alcohol. So how did this particular vehicle come about? Wygle's homemade stool was powered by a 5-horsepower motorcycle engine, which controlled a chain drive attached to a rear wheel. The front wheels were controlled by an old lawnmower steering wheel. The stool could reach up to 38 miles per hour, and at that speed, comfort is sure to be important—enter the padded seat, which had been welded to the frame. After crashing the stool while trying to make a U-turn, Wygle told the reporting police officer that he had drunk about 15 beers beforehand, and was only traveling about 20 mph when he crashed. But he refused to take a blood-alcohol test, and has pled not guilty to the DUI chargest against him. There was no word on where he was trying to go. To the bar, perhaps? Image: Newark Police Traffic Unit