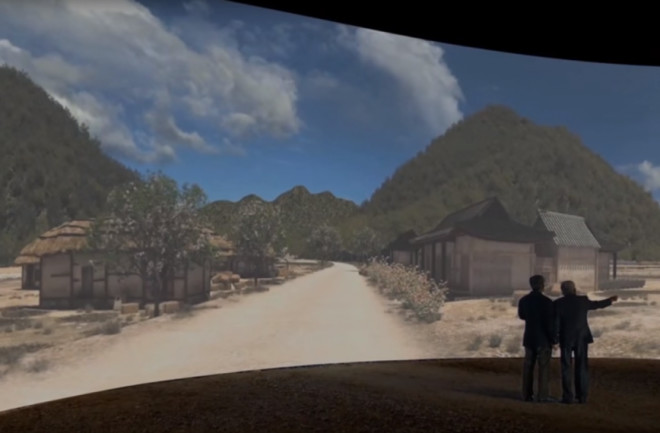 A virtual simulation project allowed an elderly North Korean man to visit his hometown after 68 years. Credit: Hyundai Motor Company Virtual reality journalism can give news audiences a deeply intimate look at the hardships of refugees from war-torn countries such as Ukraine, Syria and South Sudan. But such technology could also give displaced refugees a virtual trip back to the hometowns that existed prior to the devastation of war. A virtual driving simulation has helped one elderly North Korean man experience a trip to his home village after more than 68 years. Kim Gu-Hyeon (family name Kim) last visited his family in his North Korean hometown of in May 1947. But the start of the Korean War in 1950 and the bitter fighting that followed—drawing in both the United States and China—prevented Kim from returning home again. Since a ceasefire was reached in 1953, Korea has remained divided into two countries that technically remain in a state of war. Totalitarian North Korea is currently an isolated pariah state that actively tries to prevent its citizens from defecting to South Korea. Such political complications prevent Korean families separated by the war from easily reuniting. That's why Hyundai Motor Company , the South Korean automaker, has been working on so-called reunification projects that could also help some of the 66,099 displaced North Koreans currently living in South Korea. In Mr. Kim's case, Hyundai set out to virtually recreate the 88-year-old man's hometown of Pyeonganbukdo; a North Korean village that no longer exists. Hyundai engineers drew on both Kim's memories and data from the South Korean government's Vworld Spatial Information Open Platform. The project eventually allowed Kim to experience a virtual car ride that took him across the heavily-guarded border into North Korea, through a virtual recreation of the North Korean capital of Pyongyang, and ending with a return to Kim's hometown village. Instead of creating the experience for a virtual reality headset, Hyundai engineers displayed the virtual images on a huge curved screen surrounding a real car where Kim and a "driver" were sitting. https://www.youtube.com/watch?v=t4GDluTGgn0 A visibly moved Kim excitedly pointed out passing landmarks as the drive progressed. Eventually, he got out of the car and prostrated himself before a virtual family grave marker as he talked aloud to his deceased parents. Hyundai's demonstration may not have used virtual reality, but it effectively showed what a similar project might deliver for other displaced refugees through a virtual reality headset. If virtual reality can make people feel a visceral connection to an experience far removed from their own, it should prove even more potent when triggering personal memories of a particular place or experience. For example, the University of Southern California's Institute for Creative Technologies has used a "Virtual Iraq/Afghanistan" experience as part of exposure therapy for treating military personnel suffering from post-traumatic stress disorder. In a different sense, Hyundai's project also shows the potential for virtual simulations or virtual reality to provide the experience of touring historical real-world places that no longer exist. That may prove especially helpful for other displaced North Koreans who want to experience their old hometowns from before the Korean War, given how the conflict ended up destroying a majority of Korean cities and even villages. But such technology could also grant virtual history tours of places such as ancient Rome.