possess the animal kingdom’s most complicated eyes, capable of distinguishing between 100,000 colors — 10 times as many as humans — and seeing circular polarized light, or CPL, which can’t be detected by any other creature [Wired.com]. 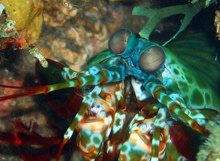 A new discovery about how mantis shrimp process light could give rise to new and more powerful consumer electronics, according to a new study. Mantis shrimp

detect visible light and turn it into a signal the brain can read. But ... mantis shrimp also have a special group of photoreceptors, known as R8 cells, which can also detect UV and polarized light [ABC News]. The mantis shrimp is one of the few animals

that reflects circular polarized light off its skin; since other shrimp can see that reflected light, it serves a communication function. Says lead researcher Justin Marshall:

"They're talking to each other with a secret light channel" [ABC News].