This solo effort explored the vast parameter space of pie, studying the effect of fat content and temperature on the texture of the shortbread crust, as well as the effect of pH on the browning of the streusel topping. The final winning pie had shortbread made with room temperature standard American butter. 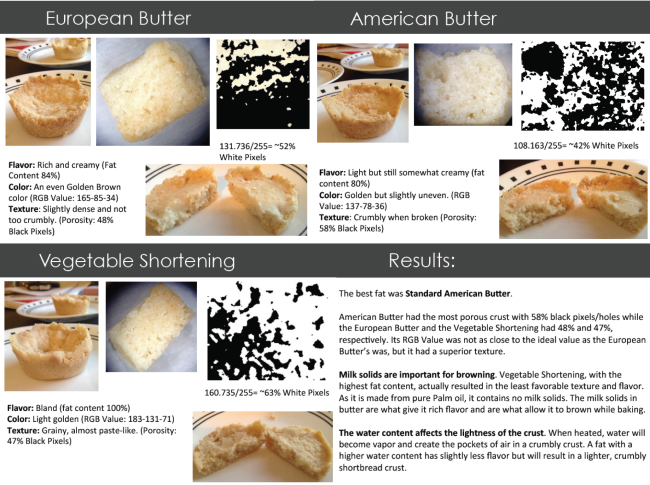 Effect of different fats on the shortbread crust. The quality of the shortbread crust was evaluated based on its color and texture. Porousness (“porosity”) was quantified by converting crust image pixels to black or white, with black pixels representing holes in the crust. A higher percentage of black pixels corresponds to a higher porosity and thus a crumblier crust. The extent of browning was quantified by calculating the RGB values of each crust image and comparing to a “deep golden brown” color standard (RGB 184-134-11). Standard American butter created the most desirable crust in terms of both browning and porosity.

The RecipeApple pie with shortbread crust and streusel topping

For the filling: 3-4 Granny Smith apples, peeled and cored 3-4 Fuji apples, peeled and cored 3/4 cup granulated sugar 2 tbsp flour 1/2 tsp salt 1 tsp cinnamon 1/4 tsp nutmeg 1/4 tsp allspice For the crust: 1 1/4 cups all purpose flour 1/3 cup granulated sugar 1/2 tsp salt 2 sticks of standard American butter at room temperature 1 egg white, separated For the streusel: 3/4 cup rolled oats 1/2 cup chopped walnuts, pecans, or almonds 1/4 tsp salt 7 tbsp flour 6 tbsp brown sugar 4 tbsp melted butter 2 tbsp honey Preheat oven to 375F. To prepare the filling, cut the apples into approximately ¼ inch slices. Combine with the remaining filling ingredients and sautée over low heat until the water from the apples forms a sauce and thickens slightly. Set aside to cool. To prepare the crust, whisk together flour, sugar, and salt. Cut in the butter with knives or a pastry blender. Pour the mixture into a pie pan and spread evenly with back of a large spoon or measuring cup. The crust should be about 1/2 inch thick. Bake crust at 375F for about 15 minutes or until the crust is a light golden brown. Allow the crust to cool for 2-3 minutes, then brush with the egg white. While crust is baking, prepare the streusel. Combine the dry streusel ingredients. Mix in melted butter and honey to form clumps. Set aside. To assemble the pie, pour filling into the pre-baked, egg-washed crust and sprinkle streusel on top. Bake for about 35 min at 375F. Streusel should be deep golden brown.