Shell Eco-Marathon: Like a VW Beetle, But with 1.1 Horsepower 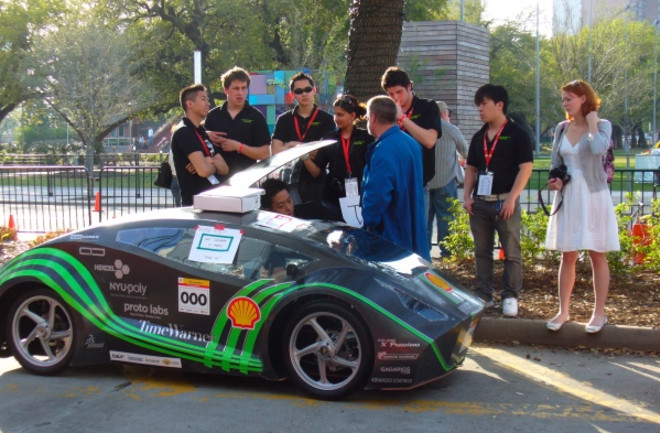 Given that they make up 40 of the 50 cars in the fields, the vehicles in the prototype category ruled the road course here Houston for much of yesterday. But as day one rolled on, the urban concept cars—which look a little less like futuristic bobsleds on wheels and little more like what you'd recognize as a car—cruised around the track. The car above is Concept Zero, by the crew from the Polytechnic Institute of NYU. (They'd be DISCOVER's home team, as we're based in New York.) Team members Jonathan Sorocki and Michael Choi say that besides the challenge of trying to build their own car within the span of just months, they ran into another problem: They weren't allowed to weld on campus. As it turned out, that minus became a plus. With some funding from Time Warner and Nordan Composites, Sorocki and Choi's team built Concept Zero from carbon fiber. With only one weld in the car, it weighs in at a slim 227 pounds, Sorocki says, and much of that weight comes from the swank rims they procured from Vespa Soho in Manhattan. Thus, despite the fact that Concept Zero isn't much smaller than a Volkswagen Beetle, it putters around the track powered by a 1.1 horsepower engine. NYU made a full run with 144 MPG yesterday. However, shortly thereafter the axle shifted and the disc brake started rubbing against other parts. After a night of little sleep and spare part runs to Home Depot, the car is back together and the crew is shooting for 200 MPG today. And if they don't win any mileage awards, the team members have their other bases covered: NYU is the most active team lobbying for the people's choice award. That piece of paper you see on the window lists texting instructions for voting. At the other end of the funding spectrum lies Durand High, the ethanol-powered Wisconsinites we covered yesterday. After the team repaired the bent bike wheels that car #50 suffered in a morning accident, the vehicle—which contains less than $1,000 of materials and runs on a 5.5 HP Honda engine donated to the school eight years ago—cruised to a 345 MPG run yesterday. Now coach Bill Rieger says the team plans to let the driver give a little more fuel in bursts and do more coasting, to see if strategy can get them up to 500 MPG. Durand's 5.5 HP is more than most teams brought to the Shell Eco-marathon, so it's worth a shot. "We got overkill," Rieger says. "We're going to dig in today."