Shell Eco-Marathon: Just Get on the Board 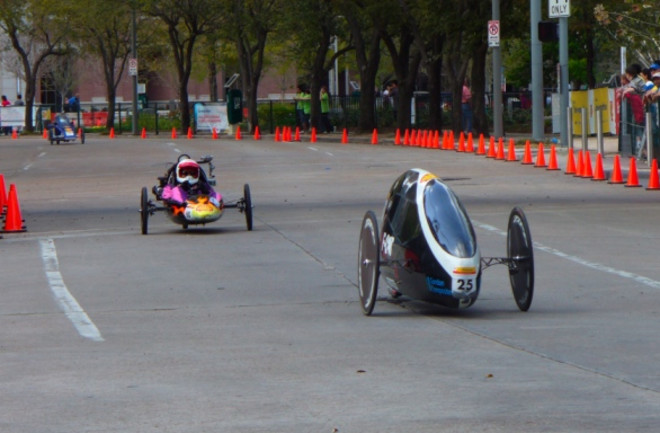 As we saw this morning, just taking a vehicle designed strictly with mileage in mind and getting it around a track 10 times in no easy task. Grand Rapids High School, who we covered this morning, saw their car "The World's Fastest Indian" bottom out over a bump near the final turn and grind to a halt. As of this moment the team had gone through an emergency session in the garage—which is actually a huge room in the convention center littered with tools and frantic young engineers—and headed out to try it again. The key, says coach Michael Werner of Granite Falls High School in Washington state, is to just get on the board. The two-seater diesel his boys' team built managed to chauffeur Shell's Marvin Odum on a tour of the track, but thereafter suffered some transmission problems. The girls' team had their aptly-named "Iron Maiden" roadster on the way to a successful run this morning when it threw a chain. "I think we're on Plan E, F, or maybe G," Werner says.

But fortune turned for Granite Falls, and this afternoon the girls finished all 10 laps around the downtown Houston track, erupting in a chorus of cheers as the car pulled in to have its fuel mileage measured by Shell volunteers. Werner says he told them to forget the mileage and just get the car over the line. Once you get a number on the board, he says, it's there, whether it's 50, 100, or 200 mpg. Now that Granite Falls has a score, the girls plan to drive with a little more strategy, tweaking their fuel use to go for a big number. Many of the other drivers that have already completed a successful lap or two have begun to figure out the course, giving the engine a burn at the start of the home stretch and coasting the rest of the way to save gas, and staying tight through the backside turns. Even if the team misses its mileage goals, Werner says they'll be strong in the other competitions, like ergonomics or safety. "They're as comfortable as you can be in a sardine can," he says of the drivers. Now he just needs to get the boys' team on the board, which may take a little more garage time, and some motivation. "We'll be out here, with the successful ones," he teased one of the boys headed inside for continued repairs.