Shell Eco-Marathon: It's Not Easy Being Green 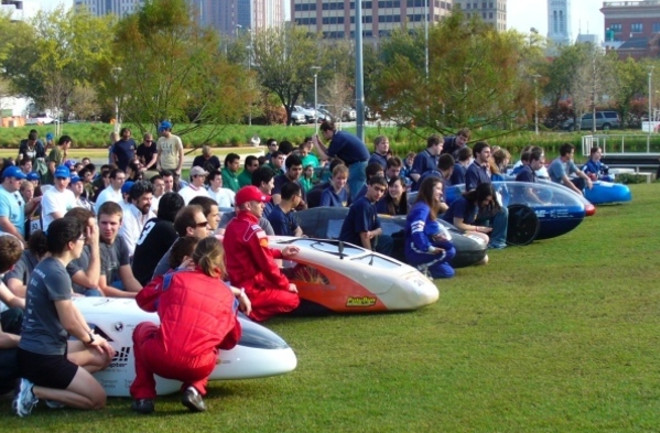 And they're off. This morning Shell's Marvin Odum waved the ceremonial green flag, and the 50 vehicles that came down for the Shell Eco-Marathon Americas are getting ready to make their test runs around the oval track on the streets of downtown Houston. It's the first time the event has come here, and Mayor Annise Parker says it belongs in a car city like hers. "We want to figure out a way to be Houston, but be better about it," she says. "We're still a car city, and we get excited for moving vehicles."

It was a long road just getting here, in the literal and metaphorical sense. University of Missouri team member Jon Tylka says "It's really a miracle we have a car." Missouri's car, seen here, is the only entry in the smaller of the two divisions, urban concept, to run on a hydrogen fuel cell, and it was a couple years in the making. Tylka says the team was formerly working on a solar car, but solar vehicle competitions have been receiving less funding. Despite the weeks and months that went into the project, Tylka and the team spent three or four all-nighters (it's hard to remember how many when you're sleep-deprived) preparing the car before and after the 15-hour drive down from Columbia, Missouri. Its driveshaft sheared before competition, and its electrical system caught fire. Missouri's car is one of the few equipped with a suspension; they wanted to make the vehicle as close to a real car as possible, but that has presented difficulties too. One team member who speaks German had to call Europe to fix a last-minute bug in the fuel cell. At one point even the horn failed. "The horn has to work, or else we can't race" Tylka says. Thankfully, they found a replacement. We'll keep you posted on how the Tigers do. While it's a friendly competition, the team has one particular priority: Avoiding the ignominy of losing to one of the high school teams present.