She Thinks My Tractor (Beam) is Sexy 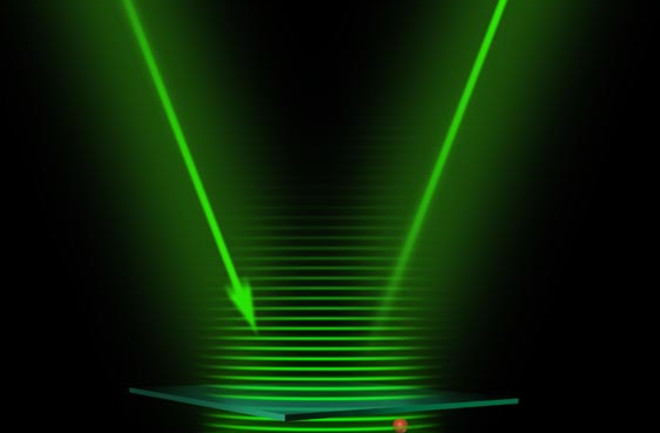 Schematic illustration of the tractor beam set-up. The particles (red balls) are held between a mirror (lower sheet) and a transparent slide (upper sheet). Laser light (green) is focused at the region between the mirror and slide, causing the particles to arrange themselves neatly at the left. Image courtesy of O Brzobohatý et al. While the country song by this title refers to tractors in an agricultural context, the tractor beam is actually a theoretical physics concept. This beam is said to draw particles toward its source instead of pushing them away. Since the theoretical existence of such a sci-fi-style beam was first proposed a few years back, most physicists have come to accept the concept, and many have been trying to prove its existence ever since. Now researchers in the Czech Republic have built the first working example of this technology. Not only did their real-life tractor beam attract polystyrene particles, but the researchers were surprised to find it could also sort them. The attractive force of the tractor beam is a bit counter-intuitive. A laser beam's photons carry momentum, which, when focused on particles, usually pushes away those particles. Such a property can be handy for things like optical tweezers, which manipulate particles via pushing. But in order to have the opposite effect---to draw the particles toward the beam---researchers had to do a little finagling, which they describe in a study in Nature Photonics this week. The set-up involved two lasers, which the researchers focus through a lens to create a homogenous intensity throughout the beam. Essentially the beam had no central focal point. They aimed this beam at tiny polystyrene particles floating in water, which scattered the beam's photons. The resulting recoil momentum, where the scattered photons nudged the particles back toward the beam, exceeded the momentum of the incoming photos as they hit the particles. As a result, the overal net movement of the particles was toward the beam. The researchers were able to move the round pieces of polymer a distance of 30 microns (30/1,000,000 meter), and bigger lasers, according to the researchers, would allow them to move the particles even farther. In addition to particle size, the researchers found that their results depended on the polarization of the tractor beam's light. S-polarizationpulled the particles in the experiment while p-polarization (perpendicular to s-polarization) pushed them. Switching between s- and p-polarized light allowed researchers to separate mixtures of two different-sized particles. This last find was the most surprising and perhaps the most useful because it will allow physicists to precisely move and sort microscopic particles for things like lab-on-a-chip. It also brings scientists a little closer to the beaming technologies of sci-fi films. Add a pickup truck and a break-up to the mix and you've got the makings of a country song that will put even Kenny Chesney's tractor to shame.