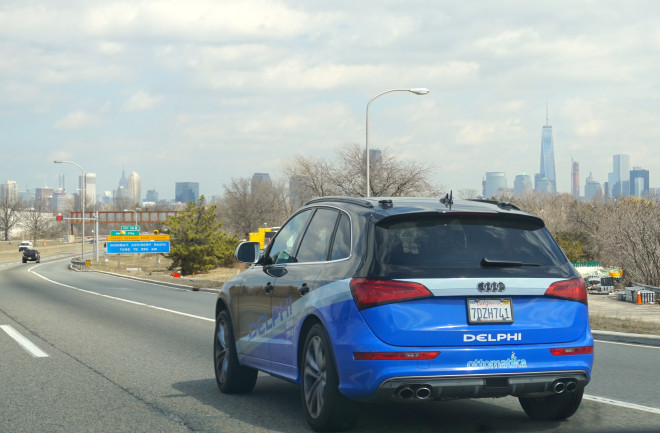 Delphi's self-driving vehicle makes its way toward heavy Chicago traffic. (Credit: Delphi) A self-driving vehicle that made its debut at CES 2015 just completed a 9-day road trip across the United States — and it wasn’t made by Google. The car equipped by Delphi, an automotive technology company headquartered in England, completed a 9-day trip from San Francisco to New York City, logging nearly 3,400 miles and operating under full automation through 99 percent of the trip. It’s the first coast-to-coast automated trip ever completed in the United States.

Delphi engineers set out on March 22 to gather troves of real-world data on their self-driving technology. A team of six engineers rotated as drivers but only took over the wheel when they needed to exit the highway and drive on hectic city streets. To make a 2014 Audi SQ5 fully automated, engineers installed six long-range radars, four short-range radars, three vision-based cameras, six laser range detectors and a full suite of software. That’s a lot of technology, but one would be hard-pressed to spot it, as it all blends seamlessly into the vehicle’s design. But as pointed out by Wired’s Alex Davies, neither the technology nor the trip itself is what’s most notable about Delphi’s accomplishment. Google has logged more than 700,000 miles with its self-driving vehicles, and Audi just completed a trip from Silicon Valley to Las Vegas. The biggest takeaway is that it will generate a lot of positive buzz about self-driving cars.

Not If, But When

Although Google gets a lot of headlines for its driverless vehicle concepts, there are a lot of players entering the game. Honda announced it would begin testing its self-driving prototypes at a former U.S. Naval base, Nissan is pledging to have autonomous vehicles in Japan by 2016 and Apple reportedly wants to get into the vehicle business. So the question isn’t whether driverless cars will someday appear in vehicle showrooms, it's when — and who will get there first.