A new device uses LED light to give a blind poet sight. 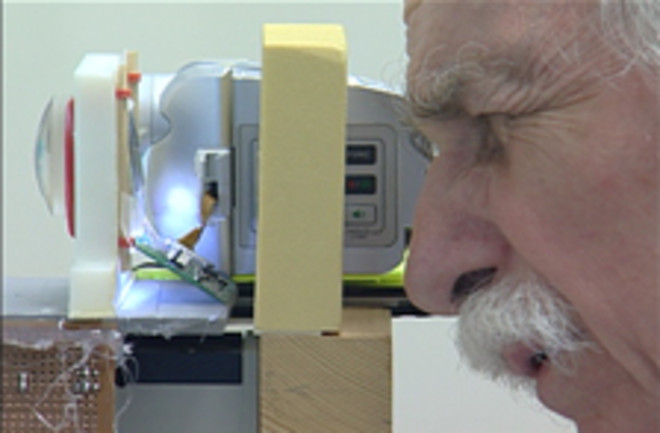 Robert Webb worked with Elizabeth Goldring to create a "seeing machine" for the visually challenged. | ScienCentral

A visually impaired artist and poet at the Massachusetts Institute of Technology has collaborated with an optics expert to create a visionary new tool that could assist people who are visually impaired due to eye diseases like macular degeneration.

A combination of visual problems left MIT poet and artist Elizabeth Goldring with only partial eyesight. During one exam, doctors used a device called a Scanning Laser Opthalmoscope, or SLO, which projects images onto the retina—the part of the eye that turns light into sight. The instrument is used for determining the severity of vision loss, but Goldring "saw" that it could do much more.

"I asked them if they could write a word, and they wrote the word 'sun,'" she recalls. "I saw that too, and it was the first word I'd seen for many months."

Goldring collaborated with the machine's inventor, Robert Webb of the Schepens Eye Research Institute, 30 MIT students, and some of her personal eye doctors to create a smaller, more affordable device they call a "seeing machine."

"I was a poet before I became visually challenged, and part of the reason I felt so strongly about developing the seeing machine was my effort to keep my visual sense alive and active so that I could continue to be a visual artist and poet," says Goldring.

Unlike the SLO, which uses expensive lasers, the seeing machine relies on an inexpensive LED light that projects computer images from a screen through a lens that focuses the light onto the retina.

"Only the part of the retina that we want to illuminate is illuminated, and we don't get distracting bounce from all the rest of the inside of the eyeball," says Webb.

And when hooked up to a computer, the device can be used for everything from reading to "pre-visiting" unfamiliar locations. With the latest color version, participants can explore a museum gallery containing Goldring's art. When the viewer gets close to an artwork, the piece is explained in Goldring's voice.

"Part of the difficulty of being visually challenged is that you're often in a position where it's terrifying, terrifying to go somewhere new," says Goldring. "And with this machine you could have a whole library of public buildings, and you could pre-visit these buildings before actually traveling there. I'd like to see whole Internet libraries of visual experiences for people who are visually challenged."

Webb cautions that the seeing machine is neither a therapeutic nor a training device, it's a low-vision aid. And there are many other, less expensive sight-magnification tools already on the market. But Goldring hopes to make the seeing machine a new option worth looking into.