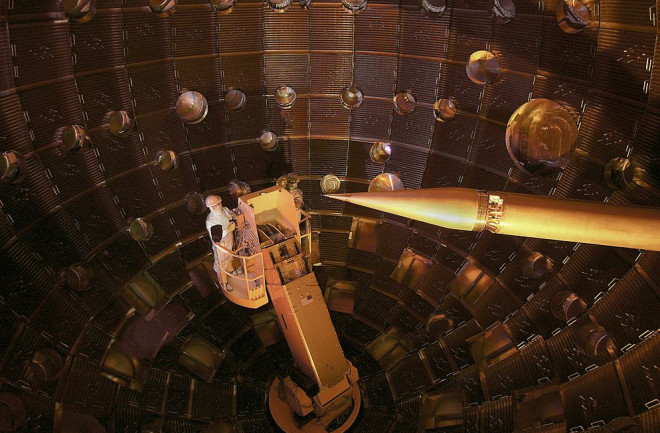 A scientist works in the firing chamber of the National Ignition Facility. Credit: Lawrence Livermore National Laboratory, Lawrence Livermore National Security, LLC, and the Department of Energy Scientists are a step closer to harnessing the same force that powers the sun, nuclear fusion, to someday pave the way for reactors that could provide an almost-infinite and carbon-free source of energy for Earth. There is a long way to go before nuclear fusion reactors power our homes, but researchers at the Lawrence Livermore National Laboratory in California reached an important milestone: For the first time, scientists produced a fusion reaction that yielded more energy than went into it. The study’s lead physicist Omar Hurricane explained the milestone to Reuters today: "Really for the first time anywhere, we've gotten more energy out of this fuel than was put into the fuel. And that's quite unique. And that's kind of a major turning point, in a lot of our minds."

Nuclear fission, the kind used in nuclear reactors today, involves splitting atoms in two. Fusion, on the other hand, melds two into one. It's been a long-sought-after energy source because it is the most efficient power-producing process we know of. Hydrogen is a plentiful fuel, and unlike fission, fusion reactions create minimal waste. The setup was this: 192 lasers were aimed at a pea-sized gold cylinder, called a hohlraum, inside of which was a 2-millimeter pellet filled with deuterium and tritium (isotopes of hydrogen). When turned on, the laser beams struck the can’s inner walls and released X-rays that crushed the pellet to a fraction of its original size. The intense pressure caused the two isotopes’ nuclei to fuse, setting off a chain reaction that generated temperatures hotter than those on the sun's surface.  Thus scientists essentially created a tiny star for about one second, until it blew to pieces. The total energy yield was tenfold that of previous laser fusion experiments, and for the first time, it exceeded the amount of laser energy that entered the fuel pellet. Still, the output was only 1/100^th of the break-even point known as ignition, when total energy output exceeds total input, due to much of the laser beams' energy getting absorbed by the hohlraum. The findings were published today in Nature.

Mark Herrman, director of the Pulse Power Sciences Center at the Sandia National Laboratory, told the Washington Post nuclear fusion is still a long way from becoming a viable power source for civilization:

“They’ve got a factor of about 100 to go. We want a lot of fusions. They made 5 million billion fusions, but we want more than that. We want 100 times than what they made.”

To reach ignition, researchers need to compress the fuel pellet to a nearly perfect spherical implosion, which is what makes fusion reactions so difficult. Altering the shape of the gold canister, and ramping up the pressure from 150 gigabars — 150 billion atmospheres of pressure — to about 300 giagabars could help achieve ignition. Still, can people expect to see the first nuclear fusion power plan in their lifetimes? Hurricane told Reuters he honestly doesn’t know:

"I wish I could put a date on it. But it really is (just) research. And, you know, although we're doing pretty good, we'd be lying to you if we told you a date."