The bots behind the most daring feats and dazzling discoveries of deep-sea exploration. 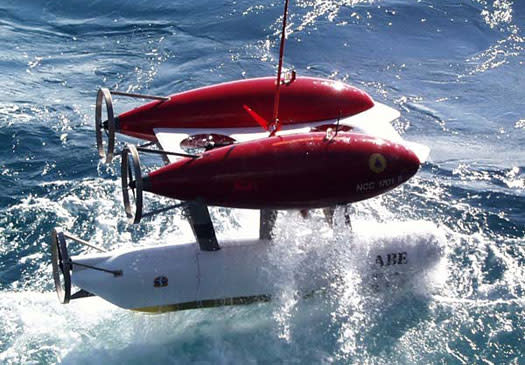 On March 5, oceanographers mourned the passing of a cherished colleague: an undersea robot affectionately known as ABE (short for Autonomous Benthic Explorer).

ABE may not have had the renown of DSV Alvin, its illustrious forebear, or the gee whiz technology of its modern contemporaries, but it was a pioneer of underwater robotics. During its fruitful 16-year career the autonomous bot made more than 200 deep dives, navigating the treacherous terrain of the sea floor and mapping underwater mountain chains with little input from above. ABE was ultimately lost at sea off southern Chile during a research dive.

As humans have set out to examine the deepest, most mysterious ocean depths, ABE and his ilk have been indispensable workers. Click through the gallery for the greatest discoveries made by mechanical deep-sea explorers. 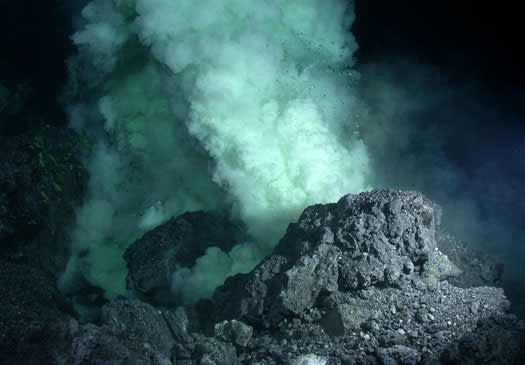 In Greek mythology, the heroic Jason was cursed by the gods for abandoning his erstwhile lover, Medea; he died miserable and alone. Fortunately, his remotely operated vehicle (ROV) alter ego has avoided his ignoble fate, even managing to peacefully co-exist with its Medea counterpart.

Jason enables oceanographers from the Woods Hole Oceanographic Institution (WHOI) to plumb the seafloor from the comfort of a ship's deck. In this two-body system, Jason does the exploring while Medea acts as a relay to the ship, decoupling Jason from the ship's movements and delivering electrical power and data through a 6-mile fiber-optic tether.

Jason allowed scientists to capture the first ever video footage of an erupting deep submarine volcano near Guam. Shrugging off the considerable pressure at a depth of 1,700 feet, Jason watched lava slowly ooze out of the vent and explored the unique ecosystem that surrounded it. Last year, Jason reprised its role by helping scientists obtain video of the deepest underwater eruption ever observed. 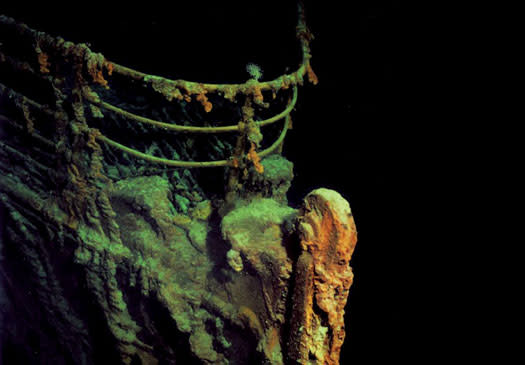 Arguably the feat that still defines Alvin's legacy, the discovery of the wreckage of the Titanic in 1986 showcased the technological capacities of remotely operated vehicles (ROVs) and even put Alvin on the cover of TIME. Although Alvin is a manned vehicle, capable of bringing three people down to a depth of 15,000 feet, the tangled wreckage was too dangerous for Alvin to enter. That's where the ROV came in.

The shipwreck's resting place--about 12,500 feet deep off the eastern coast of the United States--was originally identified by a 1985 expedition led by the oceanographer Robert Ballard, and in July 1986 he and his colleagues went back for a closer look. Alvin made 12 dives while exploring the wreck, deploying Jason Jr., a small ROV built for the occasion, to snap close-up shots and to enter the sunken ship itself. 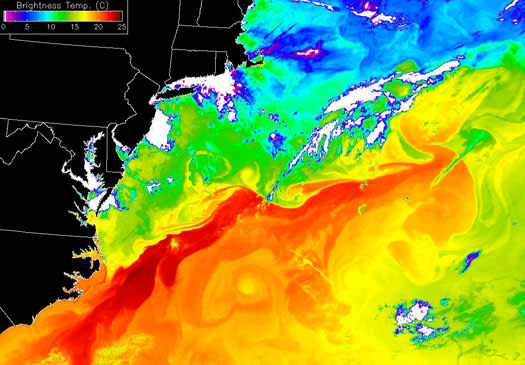 Just how "autonomous" is an autonomous underwater vehicle (AUV) really? In the case of Spray, a sleek, torpedo-like glider designed by Scripps Institution of Oceanography (SIO) and WHOI engineers, pretty darn so.

In 2004, the bright red glider earned accolades for becoming the first robot to successfully traverse the raging Gulf Stream. Launched from southern Massachusetts in September, Spray reached Bermuda in less than two months, puttering along at an average speed of 12 miles a day. The whole time, it was busily collecting troves of oceanographic data that it would transmit back to its human masters at WHOI and Scripps.

One day, oceanographers hope Spray and other gliders will be able to roam the oceans at will, providing an almost limitless supply of data that could be used to build more sophisticated climate models and develop better weather forecasts. 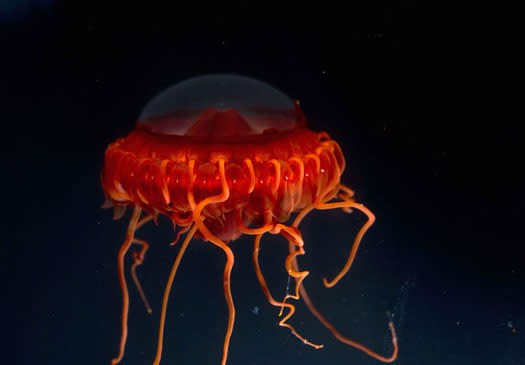 If you've ever perused one of the deep-sea critter galleries featured on this site, you probably owe ROVs your deep and abiding gratitude. To capture this gorgeous jelly, photographers traveled to the Celebes Sea, the location of one of the world's deepest basins.

With the assistance of Global Explorer, a ROV equipped with a high definition color video camera and digital still camera, the researchers were able to snap some of the first pictures of numerous species that are believed to be new to science, including this red medusa jellyfish, which belongs to the genus Atolla. The critter's bright red coloration serves an unusual purpose: It masks the bioluminescence given off by any glowing prey that the jelly is in the process of digesting. 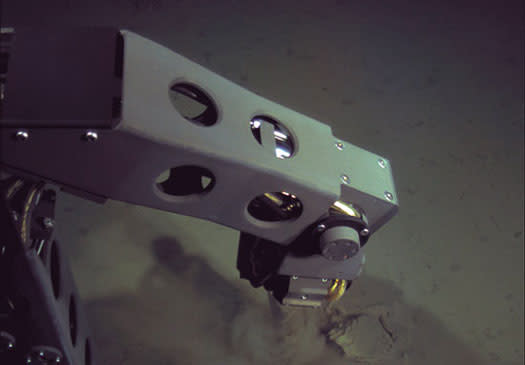 In a depth-defying feat of dazzling daring last year, the robot known as Nereus dove to the deepest spot in the ocean and spent 10 hours exploring a spot that is deeper than Mount Everest is high.

The record-setting Nereus collected samples from the seafloor with the help of a hefty manipulator arm (as seen in the image). Engineers at WHOI built Nereus to endure the deep sea's intense pressures, which effectively load each square inch of its surface with roughly 15,000 pounds--the same level of pressure you were to feel if someone placed three Hummers on your big toe.

On May 31, 2009, Nereus proved its seafaring mettle and plunged to a depth of 6.8 miles in the Pacific Ocean's Mariana Trench. Robots like Nereus will make it much easier for scientists to explore vast regions of the deep ocean that were once off-limits. 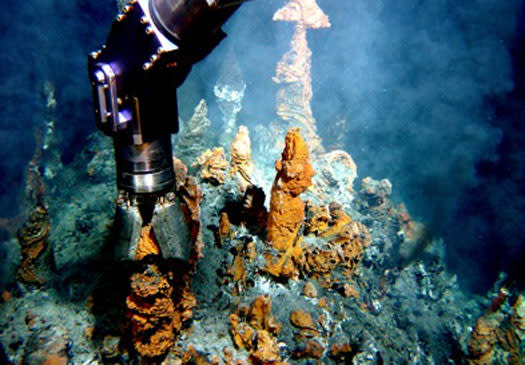 OK, so he's not an autonomous bot, but we simply have to give more props to the Deep Submergence Vehicle known as Alvin. The oldest and most venerable vehicle of its kind, Alvin has completed over 4,400 dives over the course of its momentous, 46-year career.

In the late 1970s, Alvin and his passengers discovered the first known hydrothermal vents, or "black smokers" as they are sometimes called. Initially, scientists thought that no species, let alone a bustling community, could survive the scorching temperatures and crushing pressures of these sites, most of which are located about 7,000 feet below the ocean surface in areas of seafloor spreading.

To their great surprise, researchers found out that not only did the magma-heated, mineral-rich water spurts support life, they nursed entire ecosystems. 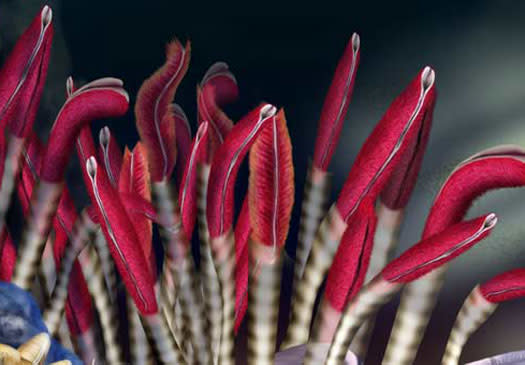 Scientists were surprised that hydrothermal vents could harbor such a dizzying array of species. The real stunner, however, came in the form of what looked like a feathery, elongated lipstick tube: Riftia pachyptila, more commonly known as the giant tube worm.

Its discovery upended one of biology's core tenets: That all life essentially depends on the energy of the sun, either by using sunlight for photosynthesis or by munching photosynthesizing organisms. By contrast, in the tube worm millions of symbiotic bacteria that dwell within the its large plumes grab hydrogen sulfide and other noxious chemicals that seep from the vents and convert them into food and energy for their host, a process called chemosynthesis.

In 1998, a bot known as ROPOS ("Remotely Operated Platform for Ocean Science") sawed a black smoker free from the sea floor and hauled it up to allow scientists to examine its structure and unique organisms. 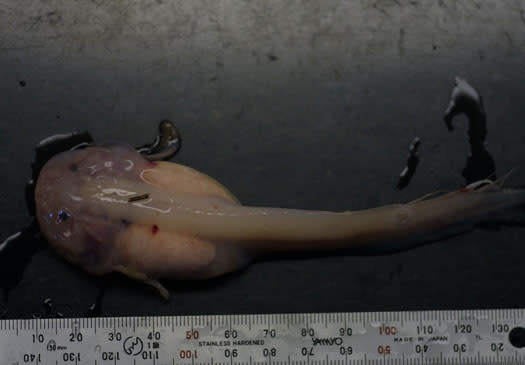 This pale, slithering creatures may look like something out of a sci-fi flick, but it is in fact a fish--a snailfish (Pseudoliparis amblystomopsis), to be precise. Amazing video footage of the snailfish, the first of a school of fish living in the deepest sea, was taken by the Hadal-Lander, a ROV with a titanium-encased high-resolution camera, in the Pacific's Japan Trench. These snailfish live almost five miles beneath the ocean surface, in pitch-black waters and under immense pressure.

To lure the elusive snailfish out into the open, the researchers strapped a dead mackerel to the lander; an energetic school of snailfish quickly located the appetizing carcass and made short work of it. The specimen seen above was recovered from a trap laid near the bait.

The researchers pronounced themselves shocked by the snailfish's vitality and sociability. "We thought the deepest fishes would be motionless, solitary, fragile individuals eking out an existence in a food-sparse environment," said researcher Monty Priede.