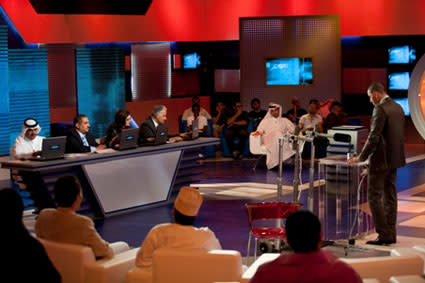 If America's Got Talent, then the Arab World's Got Science--that's if you believe the messages in reality shows, anyway. The Arab reality show Stars of Science, currently in its second season, takes young (18-30) inventors from around the Arab world and pits them against each other, American Idol style. The show, presented by the Qatar Foundation for Education, Science and Community Development, hopes to encourage entrepreneurship and creativity in both the contestants and the show's viewers, Abdulla Al-Thani told AME info:

"The aim is to showcase the whole process of innovation -- from inspiration, to the elaboration of a concept, its development and finally, its application," said Dr. Abdulla Al-Thani, Vice President, Education of Qatar Foundation. "Science and technology will now be given an entertaining twist through the very popular reality TV show format, making the topic accessible to all. We hope 'Stars of Science' will promote the innovative spirit of young people in the Arab world."

The competition includes weekly eliminations based on challenges involving the engineering, design, or business of the contestants' inventions; daily shows following the contestants as they work, educating the audience about the science behind their inventions. The students have just five weeks to engineer and design their preliminary idea into a workable prototype. For each competition, 16 inventors are picked from thousands of applicants from across the Middle East. The final winning project gets $300,000. Last year's winner was Bassam Jalgha with his invention of "Dozan," an automated tuning device for stringed instruments. Some of this year's projects: An air-conditioned vest for working in the field, designed by Maha Al Amro

. This season will wrap up with the final voting round on November 28. This year's competition should be hot, one of the shows judges, Fourad Mrad, told The National

"This is a lifetime opportunity and these innovators are very anxious, hoping to prove to the world that their idea is valid, is scientifically sound and can be packaged into something useful to society. As long as they work hard, stay on track and are committed to their goal, we should see an exciting competition."

Gene Expression: The decline of Survivor

DISCOVER: Peer Review: The Dark Side of Reality TV