Click here for information about The Christopher Columbus Fellowship Foundation 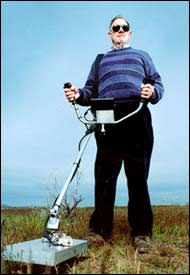 During his 30 years working at laboratories funded by the U.S. government, physicist Dick Craig has labored over his share of endless puzzles. How do we dispose of nuclear waste? How do we find out if other nations are secretly stockpiling nuclear weapons? Once in a while, he gets lucky. A single unwavering idea blooms to life joyously. That is the case with the invention that earned Craig this year's $100,000 Christopher Columbus Foundation grant.

Two years ago Craig wandered into a seminar on land mines at a nuclear technology conference in Crete. In a darkened room, an image flashed on the screen: a Raggedy Ann doll lying in the dust, a leg missing. Twenty-six thousand people perish each year when they step on or drive over land mines, a third of them the right age to be clutching a doll in one's hand. "That drove it home for me," says Craig, 64, a grandfather of 10. "It's about the children. This was a problem that people needed to work on."

Surfing the Web back home, Craig learned that more than 110 million mines are scattered over the globe from Rwanda to Afghanistan. The devices, which kids easily mistake for eggs, tops, butterflies, or hockey pucks, do more than kill and maim. They render land useless, forcing farmers to stop work. Villages must relocate or starve. There's little governments can do: After World War II, soldiers used metal detectors to clear roads and fields. But today's hidden killers, made from plastic, are hard to find.

The solution envisioned by Craig and his team— Tony Peurrung, Dave Stromswold, and Randy Hansen— is driven by physics and garden-variety spare parts. Their Timed Neutron Detector's resemblance to an overgrown weed whacker is more than coincidental. They bought a whacker at a hardware store in Richland, lopped off the ends and the motor, and fitted it with sophisticated hardware. "We spent less than $10,000 to buy parts," says Craig. The heart of the system is a minuscule amount of the isotope ^252californium, which as it decays kicks off neutrons that can be used to detect concentrations of hydrogen in the mines. Ordinarily, a neutron whizzes along at about 30 million to 50 million miles an hour, or 5 percent of the speed of light— until it whangs into the nucleus of a hydrogen atom. Hydrogen has close to the same mass as a neutron, so as a result of the collision the neutron slows down, much like one billiard ball expending energy after it bangs into another. (Other atoms slow it down, too, but not as much.) Traveling more slowly now, at just twice the speed of a rifle shot, the neutron ricochets back to the TND. A sudden wave of slow neutrons triggers a screen alert, and the device operator learns that a hydrogen source, most likely a mine, has been located. "What I like is the elegance of it," says Craig. "It's simple. It will get even simpler, so we can make it cheap and get it to the people who need it."

For Craig, the TND is a satisfying cap to his career. "This might seem a little maudlin," he says, "but I'm getting to the point in life when you look at your publications and wonder: 'In 25 years will anyone give a darn about all this?' This is something I think people will give a darn about."