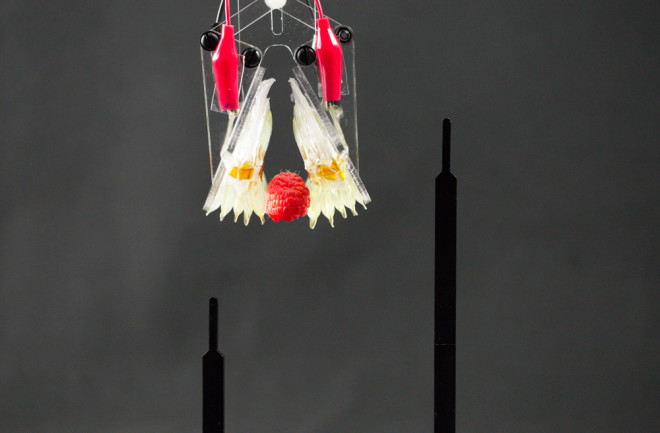 (Credit: Keplinger Research Group and Science/AAAS) Humanoid robots like Sophia, granted citizenship in Saudi Arabia, and Atlas, which backflips like a boss, are rigid, strong and rather bulky. They’re made to look like us; they’re not designed after us. But researchers are working hard to give robots a softer touch without losing strength. Two new studies released Thursday in Science and Science Robotics showcase new moving robotic parts, called actuators, that are advancing soft robots, making them more adaptable, flexible and strong. With the help of these new designs and other work being done by scientists in the field, soft robotics could benefit many sectors, including industrial and medical industries. Not only that, but since the robots are made of soft materials they are less likely to harm us, which means we could find ourselves interacting with squishy robots more in the future.

These new parts, called hydraulically amplified self-healing electrostatic actuators (HASEL), can contract with precision and force similar to mammalian muscles, even outperforming humans at times. These “muscles” can lift baseballs and even delicate items like a raspberry or raw egg. "We draw our inspiration from the astonishing capabilities of biological muscle," said Christoph Keplinger, senior author of both papers in a news release. "HASEL actuators synergize the strengths of soft fluidic and soft electrostatic actuators, and thus combine versatility and performance like no other artificial muscle before." The bare bones of these moving parts: a stretchy pouch-like shell filled with a vegetable-based transformer oil (acts as an electrical insulator that can be polarized with a charge) and hydrogel electrodes. Once voltage is applied, they flex. Researchers tested doughnut- and sheet-shaped HASEL actuators, which completed 1 million and 158,000 reps, respectively (Ron Burgundy would be impressed), while lifting more than their own weights, as outlined in the Science paper.

Building off of those designs, researcher Nicholas Kellaris and team created Peano-HASEL actuators, which are described in the Science Robotics paper. This design consisted of three connected rectangular pouches filled with liquid that could move at speeds faster than human muscles. You may have noticed that self-healing is included in the full HASEL name. If something goes wrong, say there’s an electrical overload (or a deep, deep burn), these "muscles" can repair themselves.