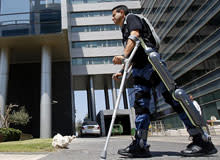 A man who was paralyzed below the waist 20 years ago is walking again, thanks to a robotic "exoskeleton" that moves his legs and can even navigate up and down hills. The inventors of the device, dubbed the ReWalk, say the experimental technology can give paraplegics a psychological boost through renewed mobility, and can also help people avoid medical problems caused by long-term wheelchair use. One of the first paraplegics to test out the device is Radi Kaiof, a former Israeli paratrooper who

has been paralysed for the last 20 years following an injury during his service in the Israeli military. He says the device has changed his life. "I never dreamed I would walk again. After I was wounded, I forgot what it's like. Only when standing up can I feel how tall I really am and speak to people eye to eye, not from below" [BBC News].

ReWalk consists of motorised leg supports, body sensors and a back pack that contains a computer and rechargeable batteries. Users still need crutches to help with balance. To move, the user picks a setting with a remote control wrist band – "stand", "sit", "walk", "descend" or "climb" – and then leans forward, activating the body sensors and setting the robotic legs in motion [New Scientist].

The experimental device comes from the Israeli company Argo Medical Technologies, whose founder, Amit Goffer, was himself paralyzed following a 1997 accident. However, Goffer won't be able to use his invention because he lacks full use of his arms. The device is currently in clinical trials at an Israeli medical center, and additional tests are expected to begin soon at a U.S. rehabilitation clinic. Argo Medical Technologies says the ReWalk will go on the market in 2010, and says the device will cost about $20,000, about the same price as the most sophisticated wheelchairs. Argo executives claim the invention is the first of its kind, saying that other

"robot suits", like those being developed by the U.S. military or the HAL robot of Japan's University of Tsukuba, are not suitable for paralyzed people [Reuters].

Read about the U.S. military's efforts to use exoskeletons with DISCOVER's coverage of Iron Man suits and the race to create supersoldiers. Image: Argo Medical Technologies