NASA's rover Sojourner reached Mars after a 200-million-mile journey but then could travel only about 150 feet before getting stuck and running out of power. Looking for a faster, more efficient way to traverse rugged alien terrain, Paolo Fiorini of the Jet Propulsion Laboratory and Joel Burdick of Caltech devised a robot that hops. A single motor enables it to jump, rotate, right itself, pan a camera, and operate onboard science instruments. The new rover has froglike metallic legs and a spring attached between its knees. The spring pulls taut when the robot bends its legs, allowing it to take 6-foot hops on Earth, or 20-foot leaps under the effects of Mars's lower gravity. When it comes back down, the rover rolls onto its back, tucks in its legs, and pushes itself upright, all with the aid of three motorized flaps. In recent tests, the hopping robot moved three times as fast as a complementary rover prototype with wheels, and it traversed obstacles up to three feet tall. On future missions, NASA might send a group of small, cheap hoppers to establish local communications networks or investigate hazardous terrain for signs of fossil life. 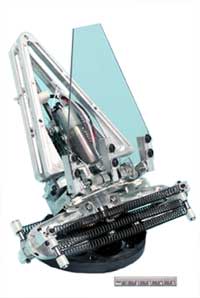