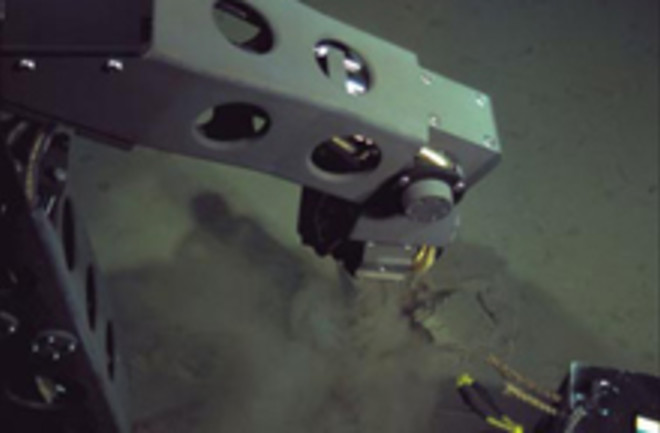 Robotic explorers on Mars get a lot of veneration for their daring feats, as well they should--but let's not neglect the robots that are busy exploring the most inaccessible regions of our own planet. On Sunday, a robot submarine known as Nereus dove to a depth of 6.8 miles to investigate the Mariana Trench in the western Pacific Ocean. Nereus descended all the way to the deepest cranny of the trench, a spot known as the Challenger Deep, and spent more than 10 hours making observations in a spot that is deeper than Mount Everest is high.

For the expedition, the team had to build a new breed of remotely-operated submarine ... which is capable of going deeper than any other while still filming and collecting samples. Sunday's dive makes it the world's deepest-diving vehicle [currently in operation], and the first vehicle to explore the Mariana Trench since 1998 [New Scientist].

So far, researchers have released only a single image (pictured), showing Nereus's robotic arm scooping up sediment. The unmanned "hybrid" vehicle can either be remotely operated by researchers aboard a surface ship via a lightweight tether, or it can be switched over to a free-swimming, autonomous mode.

Traditional robotic systems use a steel-reinforced cable made of copper to power the vehicle, and optical fibers to enable information to be passed between the ship and the vehicle. If such a cable were used to reach the Mariana Trench, it would snap under its own weight before it reached that depth. To solve this challenge, the Nereus team adapted fiber-optic technology ... to carry real-time video and other data between the Nereus and the surface crew. Similar in diameter to a human hair and with a breaking strength of only eight pounds, the tether is composed of glass fiber with a very thin protective jacket of plastic [U.S. News & World Report].

Nereus carried 25 miles of the slender tether, which it gradually unspooled. For power, it used more than 4,000 lithium-ion batteries. At the bottom of the ocean, Nereus has to withstand pressure 1,000 times more intense than that felt on Earth's surface--which is akin to the pressure that would be experienced on the planet Venus.

Only two other vehicles have ever reached the bottom of Challenger Deep: US bathyscaphe Trieste, which carried Jacques Piccard and Don Walsh in 1960, and the Japanese robot Kaiko, which made three unmanned expeditions to the trench between 1995 and 1998. Trieste was retired in 1966, and Kaiko was lost at sea in 2003 [New Scientist].