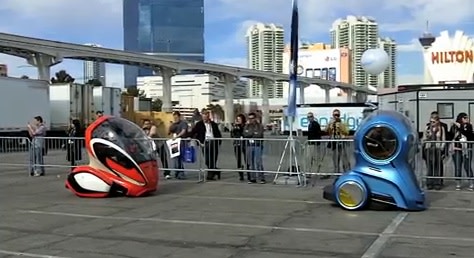 Few things will say "It's the future!" like robotic cars. While phones have become all-in-one personal assistants and video games no longer need controllers, the car has stayed stubbornly analog. Sure, you can unlock it with a remote control and listen to a thousand channels of satellite radio, but you still have to drive the darn thing.

Finally, it seems like self-driving cars are really around the corner. Google, for one, has been test-driving autonomous cars all around California. They seem to work pretty well. But if the technology does become widely available, it will be many years down the road (so to speak). The cars will have to be made safer than safe; new laws have to be written; trust will have to be gained.

The benefits to having everyone behind the wheel of a smart, self-driving car are undeniable. With perfectly efficient driving, we'd use less fuel. Without antsy drivers changing lanes or rubberneckers slowing at accidents, congestion might become a thing of the past. Without human error, how many of the 40,000 motor vehicle deaths per year would be eliminated? How many of the 10 million accidents?

Though fully self-driving cars are far in the distance, little pieces of the technology--automatic parallel parking, automatic braking, that horrible beeping thing when you're close to another object--are appearing in the cars people buy today. By the time the robot cars get here, it might not seem so strange to hand one the keys.

In the meantime, there's a compromise that might give us the benefits of smart driving without surrendering all control to the machines. Volvo just demonstrated its progress in a project called SARTRE, or Safe Road Trains for the Environment. (Only in Europe would a highway transportation project be named after an existentialist.) The "road train" is really a convoy of cars electronically linked to one another. A professional driver controls a lead car, and the cars behind latch on to that car via computer. Then the drivers in the platoon can sit back and relax while their cars automatically follow the lead driver. The cars stay close together, preventing other drivers from interrupting their train while reaping the benefits of smart driving. (Obviously, this system relies heavily on the competence of the lead driver.)

The pseudo-car at the top of this post represents another step toward fully autonomous vehicles. It's an Electric Networked Vehicle, made by GM. Not quite a car and not quite a transformer, the vehicle snaps its driver inside, then balances itself on two wheels to travel down the road. The EN-Vs can communicate with each other and drive autonomously. Tiny and lightweight, the vehicles would be fuel efficient if they used fuel--but they're entirely electronic. This is the future, after all.