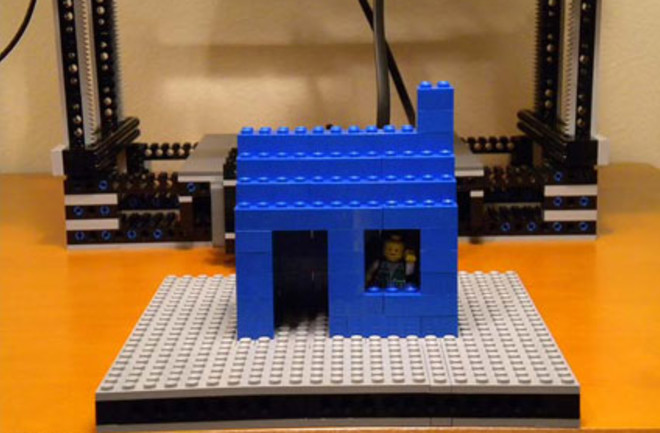 3D printers are beloved by geeks the world over. Enter the Lego 3D printer: it's not only MADE of Legos, but it also PRINTS with Legos. With only a few tweaks, this LegoBot could even take over the world print copies of itself, maker Will Gorman told Wired:

“There is a recursiveness to this whole thing,” says Gorman.

“I love the idea of self-assembly and the Star Trek replicator and I love Legos,” he says. “I wanted to bring those two worlds together."

Gorman built this recursive masterpiece for the LegoWorld expo

, happening from Oct 22th to 26th in the Netherlands. Dutch lego enthusiasts can visit the expo to see LegoBot in action, the rest of us can check out his website for detailed instructions

on how to build your own. Hit the jump for more info on his Lego-contraption and a video of it in action. For now, the bot requires a human operator to stack bricks into the feeder system and program it with a design from MLCad

(a computer-aided Lego designing program) through a PC, which determines the printout instructions. Currently the system uses only normal Lego bricks (not the Lego robotics NXT components

Science Not Fiction: I Have Seen the Furniture, and It Is Robotic