"Road Train" Technology Could Let You Doze in the Driver's Seat 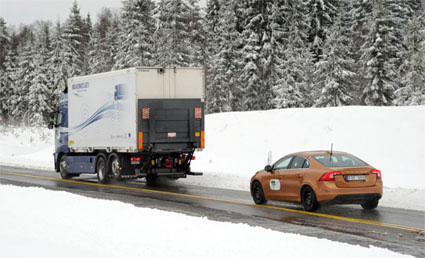 The road ahead looks smooth for automatic driving systems. For the first time, Volvo, in partnership with a European Commission research project called Safe Road Trains for the Environment (SARTRE), has successfully road-tested a linking system that allows drivers to relax and tune out. In such systems, cars form "road trains" behind a professional driver, creating a semi-autonomous convoy--essentially, a truck and car conga line that could improve highway congestion and inefficient gasoline use.

SARTRE platoons are guided by a lead vehicle, which is ... followed by a succession of other, computer-controlled cars that are electronically tethered in the convoy. Each vehicle in the platoon measures the distance, speed and direction of the vehicle directly in front, adjusting its movements to stay in formation.... Unsurprisingly, there's a metric horsetonne of technology that goes into making this possible. Each platoon car uses cameras to detect the position of the vehicle in front, all have drive-by-wire technology that allows the steering, accelerator and brakes to be controlled by a computer, and all communicate using a car-to-car wireless network. [CNET UK]

Hit the jump for more info, and a video demonstration. The road test included a car successfully linking and then unlinking to a truck--and while that may sound simple, it's anything but. In the early 1990s, a smaller platooning project called PATH was tested in San Diego, but it required the installation of induction loops into roads. What makes the SARTRE project different is that it doesn't need special roads--the technology lies solely in the linked-up cars.

Gasoline is unnecessarily wasted--and carbon dioxide is produced--whenever drivers accelerate aggressively. In a road train where the lead vehicle sets the pace for the following cars, fuel use and carbon dioxide emissions are expected to be reduced by upwards of 20 percent. In addition, the drivers behind the lead vehicle can relax on several levels: It's not only that they don't have to pay as much attention to the road, but they also don't have to fuss over traffic congestion, since closely packed cars--basically, technological tailgating--allows cars to pack together better, leaving more room on the road. http://www.youtube.com/watch?v=45IRE8W_3L8 What about drunk driving, though? If the lead driver has had a few too many, any accident would be multiplied by however many cars are linked up. So much depends on that lead driver. The researchers actually foresaw this snag, and came up with a clever solution.

Volvo's Alcoguard breathalyser system ensures the driver is sober before permitting them to start the lead vehicle, while cabin-mounted video cameras track the orientation of the driver's face to ensure they're looking dead ahead. Clever software monitors the position of their eyes too, to ensure they haven't fallen asleep at the wheel. [CNET UK]

The first trials of the system were conducted on Volvo's test track in Sweden, but within the next year scientists hope to test the system on Spain's public roads. And even though it may take a while to convince drivers that automatic driving systems are safe, SARTRE's researchers are confident that the public will come aboard, and hope that within the coming decade car trains will be introduced to Europe's roads. Related Content: 80beats: Google’s Self-Driving Cars Are Cruising the California Highways 80beats: In the Commute of the Future, Drivers Can Let a Pro Take the Wheel 80beats: An Electric-Car Highway in California, But Just for Tesla 80beats: DoE Tosses Tesla a $465 Million Loan to Make Mass-Market Electric Cars 80beats: How Would You Like Your Green Car: Hydrogen-Powered, or With a Unicycle on the Side?