Return of the Hi-Tech Condomed Finger!

First there were Google book scanners wearing finger condoms. Now there's a company selling finger condoms to prevent you from smudging your iPhone screen. Their site says the Phone Finger is "probably the funniest accessory for touch screen enabled devices available," but I'm not sure that fully encompasses the ridiculousness of this item. 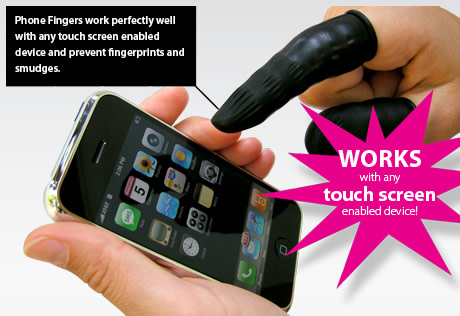 This reminds me of how some iPhone users have complained recently about the feature-not-a-bug that bars you from operating the device while wearing conventional gloves, which could become pretty annoying as the northern hemisphere (where, presumably, most iPhone users spend most of their time) slips into winter, even one blunted by global warming. The Phone Finger people would be better off following the lead of the people who make those Tavo iPod running gloves. Then again, that would probably lose them their funniest-accessory award. The Phone Finger people are geniuses.