Retinal Implant Restores Vision to the Blind Without a Camera 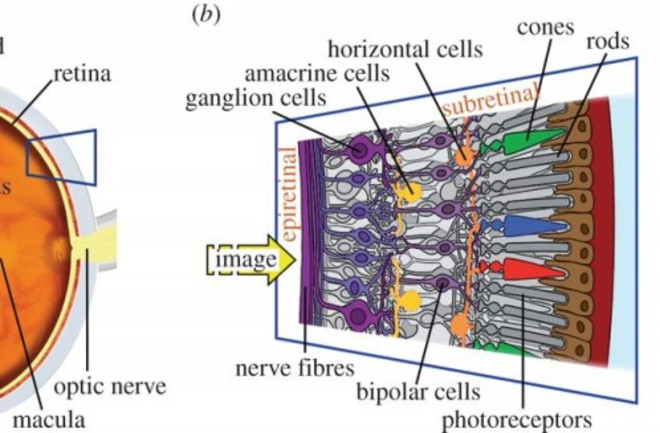 Human eye. (a) The structures of the eye and (b) the retinal layers in detail. (c) The chip carries a microphotodiode array with amplifiers and electrodes and is surgically placed subretinally in the location corresponding to the layer of degenerated photoreceptors. Courtesy Katarina Stingl et al. In people with hereditary retinal diseases like retinitis pigmentosa, the eyes' photoreceptors, or light sensors, degenerate slowly over time, eventually leading to blindness. While these people are unable to see, the rest of their visual pathway remains intact and functional. Researchers in Germany now have a way to work around this roadblock by introducing an implant to take the place of the broken photoreceptors and restore some level of communication directly with a patient's visual pathway. The researchers implanted a tiny electronic device under the retina of patients to take the place of their non-functioning photoreceptors. The implant is only about a third of an inch squared---the size of a Chiclet---and converts light into electrical signals. It is powered wirelessly via a battery pack attached behind the patient's ear. The device contains 1,500 light-sensitive pixels, each able to detect and analyze the brightness of incoming light. These signals are then amplified and transferred to the retina via metal electrodes. The brain is able to process the information into visual perception much like it would in a seeing person's brain. What sets this retinal implant apart from other, earlier attempts to restore vision, such as the one thatlast week became the first to receive FDA approval, is the fact that this one doesn't rely on an external camera. Since the implant bridges the communication gap between the eye and the brain, it directly tracks even small, involuntary eye movements without the delay of a camera. The end result of the retinal implant is a diamond-shaped field of vision---limited but certainly better than total blindness. The visual improvement varied greatly between individuals, but almost all of the nine participants reported regaining some vision both indoors and outdoors. Researchers analyzed the kind and amount of vision they regained by testing participants' abilities to perceive and locate light and motion. In one test, for example, the researchers put a number of white shapes (circle, triangle, square) on a black tablecloth. Participants were asked to identify the number of objects on the table and their shapes, as well as describe where they were in relation to one another. Almost all of participants were able to see enough to perform the task, according to the study published Wednesday in Proceedings of the Royal Society B. In addition to tests in the labs, researchers videotaped participants performing everyday tasks at home and work to see how well the device functioned in more normal contexts. Improvements were apparent there too, signalling that the technology has real promise in restoring capabilities to blind patients in their daily lives.