Researchers Use Drones to Track Glacier Change in Peru 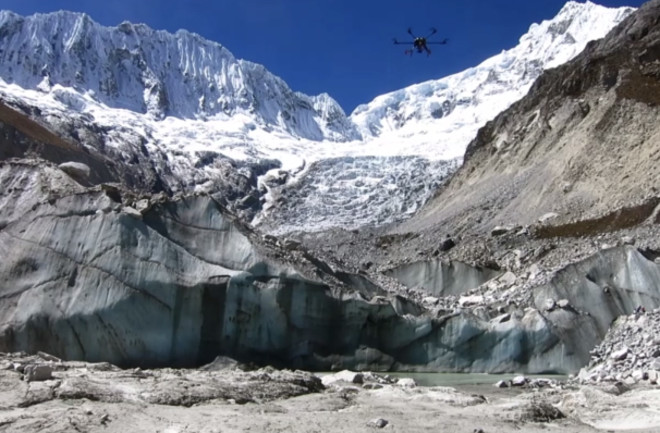 In the crisp Andes air, a drone flew at an altitude of about 16,000 feet (4,900 meters) in order to map and track the glaciers in Peru. This marks the highest altitude a drone has flown for mapping purposes in current scientific literature, according to a paper released in November in

Using a drone to map glaciers is way easier than manually staking out individual data points and provides much crisper images than satellites. “The ultimate goal was to be down in town, 10 kilometers away, having a beer in the pub and sending the drone up to do our work for us. We’re still a long ways away from that, but that was sort of the idea,” says Oliver Wigmore, an earth scientist currently at the University of Colorado Boulder and co-author of the paper. The Peruvian Andes are home to roughly 70 percent of the world’s tropical ice, but that stockpile is quickly declining due to climate change. Cordillera Blanca, a region in the middle of the mountain range, contains more than 700 individual glaciers and is in a lot of danger. “The glaciers in the area are receding really rapidly. They supply some component of dry season water to downstream communities within the Cordillera Blanca, up in the mountain ranges, and then down through the Rio Santa basin,” says Wigmore. And this problem isn't just specific to the Peruvian Andes. In September, The Guardianreported that glaciers in Asia's mountains will shrink by one third by 2100—millions of people rely on those glaciers for fresh water. Wigmore and co-author Bryan Mark set out to understand why and how the glaciers in the Cordillera Blanca are changing, using their high-flying drone to gather the necessary data. https://vimeo.com/140716213 The custom-built carbon fiber drone is equipped with large propellers and high-speed motors, which makes it easy to traverse the thin air, wind, and other rough conditions that come with soaring at high altitudes. It's capable of flying up to more than 19,000 feet above sea level (6,000 meters) — and let's just say an off-the-shelf drone like one from the DJI Phantom series wouldn't be very good at that. To give you an idea of the type of environment Wigmore was flying in, he says: “No plane or anyone sensible would ever fly up the valleys because they’d always turn around and they’d crash into the mountain. There is no air traffic up those valleys.” His customized drone, however, did just fine. After collecting drone imagery in both 2014 and 2015, the researchers created 3D elevation models of the glacier. Those models provided an in-depth look at changes at both the surface (speed of glacier, growth of melt ponds) and changes in volume (loss of ice). “We found that there wasn’t much change in the boundaries of that glacier, but there was a significant drop in the loss of volume,” says Wigmore. “We really need to look at the volume changes of ice, not just the area changes."