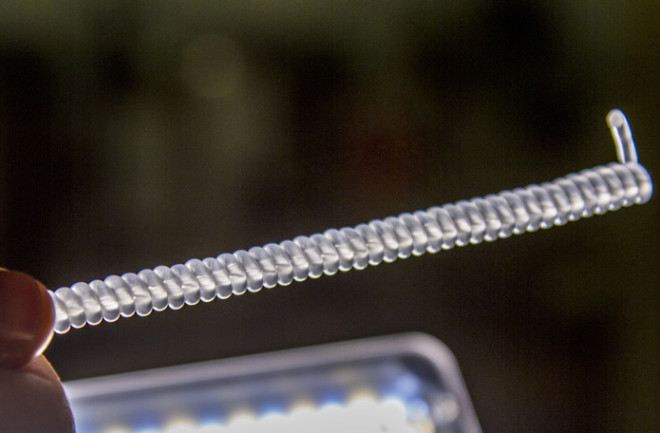 Next time you spot a muscly athlete showing off at the gym, try out this compliment: “Wow! You’ve got arms like fishing line.” Though it may not be taken well, it's actually a flattering comparison. Scientists at the University of Texas at Dallas have designed super strong artificial muscles by simply twisting and coiling ordinary fishing line.

The coiled muscles can lift more than 100 times the weight of a human muscle of the same size, and generate as much mechanical power per kilogram as a jet engine — perhaps offering an inexpensive new material to move prosthetics and robotic exoskeletons.

On a smaller scale, the twisted yarns of polymers could also one day yield clothing with pores that open and close based on temperature, or climate-controlled window shutters.

“There are many types of artificial muscles that have been talked about in the literature for years," said the study’s lead author Ray Baughman, director of the Alan G. MacDiarmid NanoTech Institute at the University of Texas at Dallas. "Very few are commercially used.”

Creating the muscles is simple: Researchers use a tool similar to a hand drill to twist different sizes of fishing line to the point of coiling. The twist allows the thread to function like torsional muscle that can lift heavy loads. Depending on the direction of the coil, the artificial muscles will expand and contract with temperature changes, which can be produced by electricity, water, light or chemical reactions of fuels.

For example, a homochiral muscle will contract when heated and expand when cooled. Coiled in the opposite direction, a heterochiral muscle will expand when heated and contract when cooled. The coiled muscles can spin a heavy rotor more than 10,000 revolutions per minute when uncoiling. Researchers tested various widths of polymer coils using several techniques to activate expansion and contraction of the coils. They report these findings in Science.

“The work capacity of these muscles is remarkable,” Baughman said. “The power generation capability can be about five times that of a combustion engine in your car.”

In the quest for artificial muscles Baughman has worked with many materials, including carbon nanotube yarns, but he says high-strength polymers are promising for their strength, affordability and availability.

Baughman said he’s focused primarily on incorporating these muscles into prosthetics and robotic exoskeletons. However, the applications of the technology are wide open, and international collaboration is opening new doors. Clothing manufacturers have already approached Baughman to weave smaller fibers to produce clothing that adapts to changes in temperature.

The muscles could also replace clunky, loud motors that control the climate in greenhouses — the polymer fibers can silently open and close shutters as the temperature changes. The polymers could also power a mechanical pump — for irrigation, perhaps — that is powered by the temperature differential between hot and cold water. There’s no telling what the future holds for the revolutionary tool now in scientists' tackle boxes. Fishing line: for more than just the big catch.