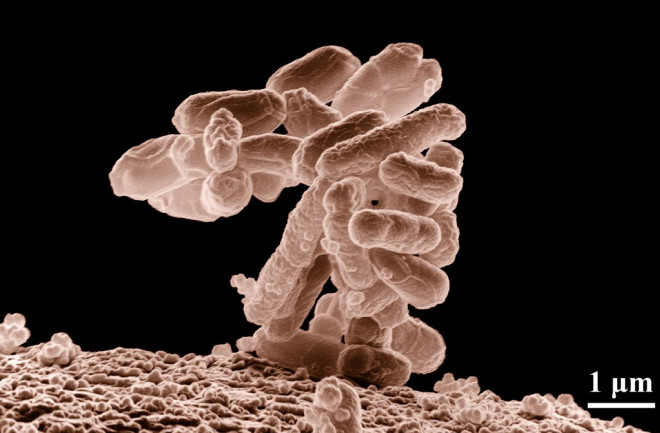 An E. coli cell magnified 10,000 times. Credit: Agricultural Research Service/USDA How handy would it be if, instead of taking your broken circuit board to the Genius Bar (again), you could just prompt it to heal itself? That's the futuristic possibility researchers have recently inched ever so slightly toward, with the development of hybrid “living materials” made from bacterial cells and inorganic matter. The discovery could pave the way for electrical components that are self-healing and environmentally aware. The team of engineers from MIT reprogrammed E. coli bacteria to latch onto gold nanoparticles and quantum dots—tiny, semiconducting crystals. With living cells and inorganic material wedded, scientists could assemble the cells into biofilms (a thin layer of bacteria bound together) that could conduct electrical current. Since the cells also communicate with one another, the resulting “living material” can adapt to changing environmental conditions. So far, scientists have just built electrically conducting nanowires, but the researchers believe the demonstration of their new material opens the door for more complex devices like solar cells, self-healing materials or diagnostic sensors.

The new “living materials” are similar to our bones, which are composed of cells that incorporate nonliving minerals, such as calcium, to create living tissues. Our bones not only give our body structure, they grow and heal in response to environmental stimuli. The team chose to work with E. coli because it naturally latches onto others of its species using proteins called “curli fibers.” Engineers programmed E. coli to produce curli fibers that picked up gold particles. They then prompted the bacteria to self-assemble into a gold-laced biofilm—essentially an electrically conducting network of gold nanowires. Using the same technique, they also programmed curli fibers to pick up quantum dots. Growing the gold and quantum dot bacteria together could create a hybrid material with both types of conductors. And because the bacteria communicate, the material can in theory be self-healing. The researchers showed that their engineered bacterium could prompt its normal neighbors to also become gold-grabbing machines. The researchers published their findings Sunday in the journal Nature Materials.

“It shows that indeed you can make cells that talk to each other and they can change the composition of the material over time,” said Timothy Lu, an assistant professor of electrical engineering and biological engineering in a MIT news release. “Ultimately, we hope to emulate how natural systems, like bone, form. No one tells bone what to do, but it generates a material in response to environmental signals.” Depending on what engineers program bacteria to pick up, these hybrid materials could form the basis of future batteries and solar cells, or even diagnostic devices and scaffolds for tissue engineering. The researchers are also interested in coating the biofilms with enzymes that could break down cellulose, which could be useful for converting agricultural waste to biofuels.