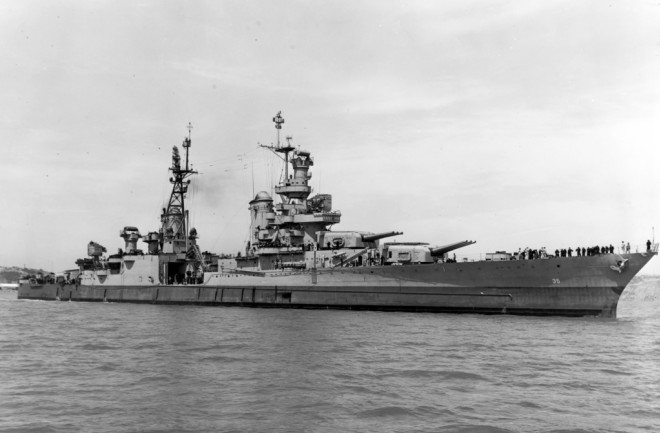 USS Indianapolis (CA 35) is shown off the Mare Island Navy Yard, in Northern California, July 10, 1945, after her final overhaul and repair of combat damage. The photo was taken before the ship delivered atomic bomb components to Tinian and just 20 days before she was sunk by a Japanese submarine. Credit: U.S. Navy The sinking of the USS Indianapolis by an Japanese submarine in the closing days of World War II marked one of the U.S. Navy's greatest maritime tragedies. But the recent rediscovery of the lost warship's wreck on the bottom of the Pacific also represents a chance to remember how its wartime career paralleled the U.S. road to victory in the Pacific theater of war—a victory built upon industrial might and the ability to wage a long war. Much remembrance of the USS Indianapolis focuses on the circumstances surrounding the sinking of the 9,800-ton Portland Class heavy cruiser on the morning of July 30, 1945. Just 316 men out of the original crew of 1,196 sailors and Marines survived after miscommunication and other mistakes meant that the U.S. Navy did not realize the ship had gone down for several days, leaving the initial 800 survivors of the sinking at the mercy of shark attacks and other dangers. But despite the tragic ending, the USS Indianapolis made a name for itself while helping to spearhead one the major U.S. campaigns to push back the initial Imperial Japanese conquest of much of the Pacific. The heavy cruiser's wreck was rediscovered on Aug. 18, 2017, by an expeditionary ship belonging to Microsoft co-founder and philanthropist Paul Allen. During the war, the USS Indianapolis gained fame by serving as flagship for Admiral Raymond Spruance, Commander of the Fifth Fleet, during the Central Pacific Campaign. That campaign represented one of the U.S. military's two island-hopping efforts aimed at putting U.S. naval and air forces within striking distance of Japan. From late 1943 onward, the heavy cruiser supported U.S. Marine landing operations against Japanese-held islands such as Tarawa, the Kwajalein Atoll, Guam, Saipan and Tinian, according to Patrick Finneran, former executive director of the USS INDIANAPOLIS CA-35 Survivors Memorial Organization. The islands of Guam, Saipan and Tinian became home to airfields for U.S. B-29 Superfortress bombers that launched devastating bombing raids on Japanese home island cities. During this island-hopping campaign, the USS Indianapolis also participated in The Battle of The Philippine Sea that involved a huge clash between the U.S. and Japanese navies in June 1944. That battle also earned the nickname of the "Great Marianas Turkey Shoot" because of the lopsided loss ratio involving Japanese aircraft shot down by U.S. aircraft and anti-aircraft gunners. By 1945, the USS Indianapolis had supported a U.S. carrier group's air raids against Tokyo and provided additional fire support to the U.S. invasions of Iwo Jima and Okinawa. The latter island became a major staging ground for the planned Allied invasion of Japan itself. But that invasion was never carried out. After being damaged by a Japanese kamikaze aircraft, the USS Indianapolis received another series of upgrades and a secretive mission to transport Uranium-235 needed for the "Little Boy" atomic bomb that had been developed by the U.S. Manhattan Project. That project had yielded a successful first test of an atomic bomb on the morning of the July 16, 1945 in the New Mexico desert. On the same morning, the USS Indianapolis received its secret cargo and eventually raced to the island of Tinian to drop it off. Tinian was the home airfield for the U.S. B-29 Superfortress known as the Enola Gay, which eventually made history by dropping the Little Boy atomic bomb on the Japanese city of Hiroshima. The USS Indianapolis was sunk by the Japanese submarine I-58 about a week before the first atomic bomb fell on August 6, 1945. But a curious thread of fate seemed to link Japanese submarine commander, Mochitasura Hashimoto, and the U.S. heavy cruiser he sent to the bottom after its secretive mission in service to the first atomic bomb use. Hashimoto later found out that his family had been killed by the Little Boy atomic bomb dropped on Hiroshima. The sinking of the USS Indianapolis toward the end of World War II had no impact on the overall outcome of the war. The heavy cruiser represented just one of more than 1,000 warships that the U.S. Navy had deployed by the war's end in 1945. That imposing number does not include thousands of additional auxiliary ships such as troopships, transports, oil tankers, and so forth, according to Cathal Nolan's book "The Allure of Battle: A History of How Wars Have Been Won and Lost." U.S. shipyards produced more warships than all over navies combined during the war.

A view of the rediscovered wreckage of the USS Indianapolis after it was torpedoed by a Japanese submarine during World War II. Credit: Navigea Ltd. By comparison, Japan's navy was a ghost of its former self after having lost 334 warships and hundreds more auxiliary ships by 1945. The Japanese merchant and tanker fleets were also devastated by U.S. warplanes and submarines. Japan built just four new tanker ships during the entire war, in a testament to the lopsided industrial capabilities between the island nation and the United States. The U.S. Navy had the muscular industrial might and logistics planning to deploy huge fleets in support of Allied war efforts in both the Atlantic and the Pacific, whereas the Imperial Japanese Navy lacked the industrial capacity and arguably squandered most of its early war advantages, Nolan argues. Japan had gambled on a forlorn hope of a short war, but found itself in a trap of its own making that involved a long war of attrition waged against the world's leading industrial power. One of those early wartime advantages for the Imperial Japanese Navy was its submarine force that included "the world's largest and most advanced submersibles, armed with the world's best torpedo in 1941," Nolan writes. But Japanese admirals failed to use their submarines effectively. They insisted on keeping the submarines close to their main battle fleets in anticipation of a climactic, decisive naval battle, instead of deploying the submarines more widely to attack Allied shipping and supply lines. Given the Imperial Navy's lack of logistics planning, Japanese submarines were eventually forced into even more awkward roles such as transporting supplies to Japanese island garrisons isolated by U.S. naval and air power. The original intended purpose of the Japanese submarine I-58 that sank the USS Indianapolis provides a pretty good sense of Imperial Japan's dire situation near the end of the war. The submarine had been designed specifically to carry Kaiten weapons: torpedoes manned by human suicide crews. It was a desperate tactic that never proved very effective. I-58's main success in the sinking of the USS Indianapolis relied upon use of traditional unmanned torpedoes. By the time Hashimoto's I-58 sank the USS Indianapolis, the Japanese submarine represented one of the few remaining submarines in the Imperial Japanese Navy's arsenal that had not yet been sunk. The U.S. Navy was in fact running out of suitable targets for its many warships and warplanes, which led to some questionable mission orders as described by Nolan:

Over the last six months, Japan’s adversaries swarmed around its shores with so many naval assets that submarines were ordered to sink tiny fishing boats in a target-depleted theater, even after some USN captains objected to such orders on humane grounds. Gun film records show USN fighters flying from fast carrier strike forces strafing any moving vehicle, and even lone cyclists and harmless beach walkers.

Imperial Japan arguably never stood much of a chance against the United States in the contest of materials and industrial might during World War II. The career of the USS Indianapolis stands in stark testament to that despite its sinking by I-58 in the final days of the war. But the fates of the I-58 submarine captain Hashimoto and the captain of the USS Indianapolis later converged once again in an unexpected way after the war. Hashimoto gave court testimony in 1945 and later wrote a letter in the 1990s to help exonerate Captain Charles Butler McVay III, who was initially court-martialed by the U.S. Navy in the wake of the USS Indianapolis sinking. That exoneration ultimately came decades after McVay had shot himself with his military-issue service revolver in 1968.