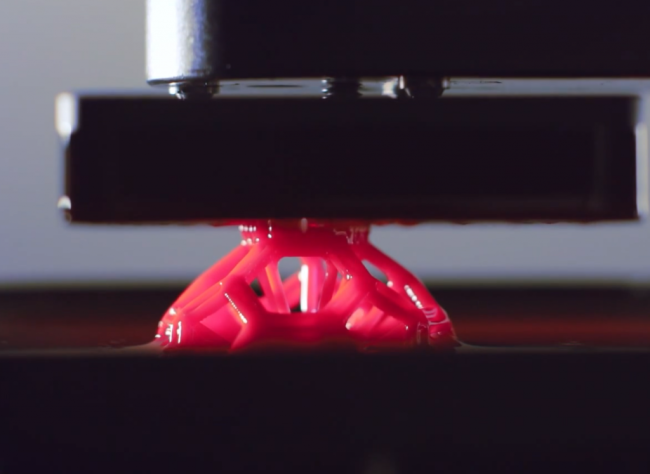 It seems hard to believe, but we may already need to start differentiating between “old-fashioned” and modern 3-D printing methods. Silicon Valley startup Carbon3D has emerged from two years of strategic hiding to blow our minds: Engineers there designed a 3-D printer that makes intricate objects, like a miniature Eiffel Tower, rise from a primordial pool of resin. Apart from looking awesome, Carbon3D’s technique also prints smoother objects and does it 25 to 100 times faster than 3-D printers currently on the market. Before you read any further, just watch this bad boy in action:

Most 3-D printers build objects by depositing thin sheets of material layer-by-layer — basically 2-D printing over and over again. Each layer of an object is typically 50 to 100 microns thick, so it takes a few hours to print something that’s just several centimeters tall. Furthermore, the end product usually has distinct ridges, like layers in the Earth’s crust, demarcating every deposit from the printer. Carbon3D’s new 3-D printing technique is called “continuous liquid interface production technology,” or CLIP. The CLIP machine features a pool of specialized resin that hardens when ultraviolet light hits it, but remains liquefied if in contact with oxygen. The pool of resin sits atop a permeable window that lets both light and oxygen through and into the pool. To print an object, specially engineered software projects a specific pattern of light though an oxygen-permeable window. The resin exposed to light hardens, but the resin exposed to oxygen remains liquefied. The projection system works in tandem with a mechanical arm that slowly pulls the object out of the resin, creating the illusion that it grew from the oozy pool. In this way, shapes and lattices can be made through a continuous process, rather than layer-by-layer.

CLIP can print a complex, 51-millimeter lattice structure in about 6-1/2 minutes. By comparison, the next fastest 3-D printing method accomplishes the same task in about three hours. CLIP-printed objects are also smooth and lack the ridges created through layer-by-layer printing. That means CLIP can print objects that meet extremely stringent design requirements, such as medical devices or machine parts. Carbon3D introduced CLIP in double-barreled fashion Monday by giving a TED talk and simultaneously publishing a paper in Science. But before you go, we've got one more video of CLIP in action. Goo never looked so good.