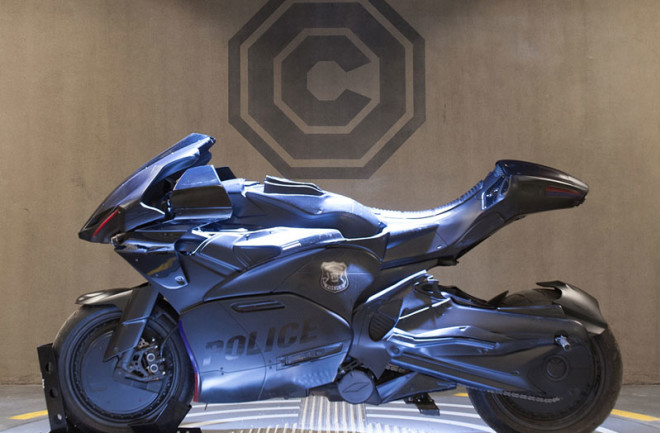 Sure, awful things happen to our RoboCop hero (no spoilers!), but he does get toys like this.  | MGM/Columbia Pictures

Sign up for our email newsletter for the latest science news
New 'Cop Joel Kinnaman (above) steps into the suit made famous by Peter Weller.  | Kerry Hayes/MGM/Columbia Pictures

Bringing a new version of a sci-fi cult classic to the screen is no easy task. Depart too much from the original, and fans will complain. Rehash too many scenes, and, well, fans will complain. When it was announced that the 1987 dystopian morality tale RoboCop was being remade, yep, fans complained. But the new movie’s production designer, Martin Whist, says he’s a fan of the first film with high expectations for RoboCop’s return (in theaters Feb. 12). Discover’s Gemma Tarlach talked RoboCop shop with Whist, who was in Vancouver working on Night at the Museum 3.

Discover: What was your biggest challenge designing the characters and the setting for RoboCop?

Martin Whist: Toeing the line between believability and entertainment. We’re talking about a man fused with a robotic body. His brain is still human, his lungs are still human, he’s still human, but he’s a human fused with a computer interface. Our basis for the design of the film was research in the cutting edge of whatever field we were tapping into. A lot of the technology we researched was not market-ready, but it would blow your mind to see how advanced it was. That was our starting point, though. We presented it as the norm. But the ideas are so amazing that even some of the real research seemed too far-fetched, that a general audience might not believe it was possible.

What exactly blew your mind?

MW:The first thing that blew my mind was graphene. I couldn’t believe it. It was so strong, so thin, so conductive. It was groundbreaking. It became the inspiration for RoboCop’s suit. I was also amazed by advances in nanotechnology, specifically robotics driven by impulses in the brain, how that’s actually happening. Straight-up robotics, too, the movement and the ability for the robots to learn, is amazing. Those are the areas — the merging of biological and robotic, pure robotics, computing and the advances in materials — that became our building blocks for designing the movie.

How did you research these areas?

MW: We did research online first, then zeroed in on who’s leading the field and contacted them to talk about ideas, examples. We did reach out to the scientific community, and the response was amazing. David Mikulis, a University of Toronto neuroscientist, for example, met with us and talked about the mechanics of the brain, where emotional components of the brain are and how they might be affected by the kind of invasive surgery RoboCop experiences. Science was our base, but you know sometimes we just have to fluff it up for entertainment’s sake. But the huge inspiration was what’s going on now in research.

Sure, awful things happen to our RoboCop hero (no spoilers!), but he does get toys like this.  | MGM/Columbia Pictures

The RoboCop movies, then and now, are all about that fusion of humans with technology, or transhumanism. What do you think? Is this a reality that’s coming soon?

MW: It’s odd. Is it evolution? Is it inevitable? Is it right? I don’t have definite answers to any of it, but I think the closeness between humans and technology is inevitable. And it’s incipient. You walk into a mall now, and every person has their head down, staring at a screen. Now they’re moving the screen onto your face. Soon, maybe all you have to do is think [about] Google Maps, and it will appear in your brain. That just doesn’t seem far away.

Is your RoboCop a reboot or a total teardown and rebuild?

MW: It’s definitely an upgrade. We did not want to dismiss the ’80s movie at all. I love it. We all love it. But in terms of the design and look, I just wanted to make it current, but still maintain parts of the original.

MW: There are two suits in the movie. We evolve into the second suit during the film, which was very intentional because we wanted to show how it would evolve in OmniCorp. When the movie starts, they’re dealing in straight-up robotics. RoboCop is the first time they attempt an extrahuman, robotic-human fusion. But for the first suit, the first one he’s fitted with, I took the original suit [from the first movie]. It was, for me, an homage to the original.

You’ve got an impressive background in fine art, including sculpting. How does that inform your work in movies?

MW: My background always helps me because it’s based in the physical world, and we still physically build the sets, the cars, the props, the robots. Having a 3-D mind, being able to think in terms of form, really helps. I’ll pitch an idea about something that doesn’t exist, but having that kind of mind allows me to previsualize and then explain my idea. With most movies now, about half of what you see is a physical build, the rest is computer-generated. What I actually build may end up being just a postage stamp-size part of the scene. But it’s my job to visualize and convey the entire scene.

[This article originally appeared in print as "We Can Reboot Him"]