Power Balance: Our Product Is Backed by "No Credible Scientific Evidence" 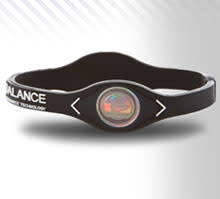 In a completely shocking and unexpected turn of events, the company behind Power Balance wristbands has officially admitted that the product isn't backed by any scientific studies--and that the company's advertisements were misleading. And right after the holographic technology to improve "balance, strength and energy" was named CNBC's Sports Product of 2010! Did you catch that? That was sarcasm. And while we here at DISCOVER may have our own opinions, the product was endorsed by SHAQ (whose name is also spelled in all caps). SHAQ, how could you lie to us after we supported you through the Kazaam! days? Power Balance claims that the holograms (which are exactly like the ones in your credit cards) embedded in their wristbands or pendants have some sort of "energy flow" which can be manipulated to "resonate" with the body's natural "energy flow." In quotes in the Daily Mail, Power Balance co-founder Josh Rodarmel explains how they "work":

"Everything in nature has a set frequency. The body has a frequency and things which cause negativity to the human body - like mobile phones and radio waves - break down its natural healing frequency. My brother and I worked out a way of putting good frequencies into our holograms so they balance out the body, making it stronger and more flexible. It works in different ways for different people. Athletes say they can last longer on the field, that they have better balance and that their muscles recover quicker. Non-athletes say it works for them, too, giving them that extra boost off the field, in many areas of life including the office and in the bedroom."

We've caught that frequency before, Rodarmel--it's the frequency of pseudoscientific hogwash. The company never provided any proof that the bands worked, or any logical reason why they should. A very similar company's product demonstration has also been debunked by the Australian skeptic Richard Saunders

. See his video below: [embed width="610" height="368"]http://www.youtube.com/watch?v=0iWY9mNJe7Q[/embed] The Power Balance company had to officially admit the lack of any scientific evidence to support their product claims because it pled guilty to violations of Australia's Trade Practices Act. The company also has to provide refunds on the product until June 2011 (to Australian customers). If only every one of the 2.5 million people who bought a bracelet (at $30 a pop) could get their money back. Hopefully with the press coverage that this little admission has garnered the company, some will be saved from the idiocy that is the Power Balance jewelry line, though it's too late for some

. But don't worry, the placebo effect may keep working even if you know about it

Bad Astronomy: Texas: From saved to doomed in just 6 hours!

The Latest Supplement Touted As a COVID-19 Treatment? Melatonin