They say that a poor workman blames his tools but according to a new study, laboratory scientists may well have cause to. Reid Macdonald from the University of Alberta has found that some botched experiments may be due to chemicals leaching from the very plastic tubes that scientists use on an everyday basis. 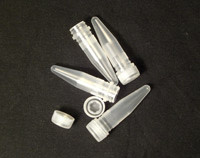 Disposable plasticware like the ubiquitous Eppendorf tubes are a staple of laboratory research, as essential to a biologist as a mixing bowl is to a cook. They are always sterilised before use, which reassures researchers that they can run their experiments free of contamination. But the new study suggests that this sense of security can be a false one.

They switched to glass containers and tested solutions that had been used to rinse plastic ones. To their astonishment, they found that pure water which had been stored in plastic tubes for the briefest of moments could then block the activity of MAO-B by up to 40%. The plastic had an even greater effect on another common laboratory solvent called dimethyl sulfoxide (DMSO).

Clearly, one or more chemicals had leached from the tube into the fluids and gone on to affect the protein. Macdonald analysed the liquids' contents and identified two culprits - a lubricant called oleamide and a disinfectant called DiHEMDA. Both chemicals are deliberately added to plasticware in the manufacturing process, and both of which can block the actions of MAO-B.

The scale of the problem was not limited to plastic tubes. Macdonald also found that the pipette tips that scientists use to transfer liquids from one tube to another can also spike water with chemicals that block MAO-B. And another chemical that leaked into water from plastic plates actually gave the enzyme a boost.

Either way, it's a problem. It means that standard equipment has the potential to mess around with an experiment's results to a fairly significant degree. The scale of the problem isn't clear, but Eppendorf tubes and pipette tips are two of the most common and essential pieces of equipment used by laboratory scientists. They are manufactured by a few key companies and used by researchers worldwide. Who knows how many results have been skewed by this previously untested effect?