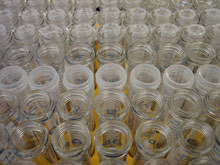 The standard lab equipment used by scientists to study subtle chemical reactions and examine biological processes may be compromising their results. A new study found that disposable plastic tubes, pipette tips, and culture plates contain compounds that can leach into common solvents. The study is the first to show how thousands of scientists worldwide may be unwittingly contaminating their experiments with plastic lab equipment.

"People are clearly aware that plastics can cause problems. Quite remarkably, nobody appears to have done what we were forced to do," says co-author Andrew Holt [New Scientist].

Holt was studying the effect of drugs on the enzyme monoamine oxidase B (MAO-B) when he noticed strange fluctuations in the results.

"We were banging our head against the wall. Finally, we realized that the plastics must be involved in the issue'' [Bloomberg].

Holt washed out his equipment with water, methanol or dimethylsulphoxide (DMSO), then analysed what chemicals had leached into the solvents using mass spectrometry. Reporting in Science, Holt and his colleagues show that the plastic tubes they were using were leaching the disinfectant di(2-hydroxyethyl)methyldodecylammonium (DiHEMDA) into water and the lubricant oleamide into methanol and DMSO [Nature News]. Though the amount of leaching varies, some of the plastic equipment produced contaminant concentrations of several hundred parts per million. "The compounds that leached out of the plastic were remarkably potent inhibitors," [said Holt]. "We were getting variability caused by these leachates that could completely mask the effects of the drugs" [Nature News].

Many of the chemicals are added during the manufacturing of the plastic equipment to create helpful properties. The additives are used to prevent static buildup, reduce stickiness and eliminate bacterial colonization. But many have been shown to interact with proteins, and to leach from food containers into their contents. [Wired Science]. The enzyme that Holt was studying, MAO-B, is thought to play a role in Parkinson's disease and a colleague of Holt noticed that the leached compounds affected the binding of GABA receptors in the brain.

For now, Holt is dealing with the problem in his own lab by carefully washing out plastic equipment with methanol and pure water to remove as much of the additives as possible. But the pre-cleaning process is inconvenient, as is switching to non-disposable glass equipment. In the long term, he hopes manufacturers will offer a choice of products that contain different additives so researchers can choose the type that will have the least affect on their particular experiments.

"It leaves us in a mess, but I don't think it's a mess that we can't address," he says [New Scientist].

HealthThe Weird Quirks of the Male Libido
Recommendations From Our Store