Planes Are Crashing at NASA, and That's a Good Thing 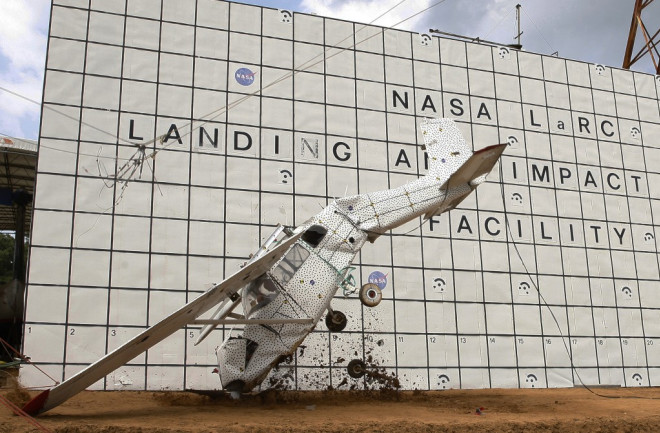 A Cessna 172 nose-dives into the dirt during testing at a NASA research facility. (Credit: NASA_Langley/Flickr) When an airplane smashes into the dirt at NASA’s Langley Research Center in Hampton, Virginia, researchers get very excited. That's because the Langley team’s ongoing destruction of Cessna 172 aircraft is generating troves of data that could ultimately save lives. It's the second in a series of the three tests — the first was on July 1 — that are part of an an ongoing effort to improve on-board emergency transmitters that many times fail to do their only job: alert rescue workers that the plane has crashed.

Brick-sized Emergency Location Transmitters (ELTs) mounted most all airplanes are designed to be tough, but often the force of a crash renders the vital technology useless. It fails to automatically send out a distress signal, along with GPS coordinates of the crash. That makes it harder for crews to mount a rescue attempt, and minutes can mean the difference between life and death.

So researchers at Langley are slamming planes into the ground to see if there’s a better way to install these systems on the aircraft. During the test Wednesday, researchers strung the Cessna 100 feet into the air and it plummeted back to Earth at 55 miles per hour — pushing the limits of what a person might feasibly survive. The goal here isn’t to make ELTs invincible; researchers just want them to work after crashes that are violent, but still survivable. In these instances, a swift emergency response is incredibly important. The tests are one piece of NASA's partnership with the National Oceanic and Atmospheric Administration, U.S. Coast Guard and U.S. Air Force to improve current search and rescue technology across air, land and sea.

The Time Is Right

Maylasia Airlines Flight 370 mysteriously disappeared over the Indian Ocean more than a year ago, and investigators have only now discovered what they believe to be their first tangible clue. People cleaning a beach on the French island territory of Reunion on Wednesday discovered debris that washed ashore. Authorities believe the hunk of metal is a right wing flaperon from a Boeing 777, the same type of plane that disappeared in March 2014 carrying 239 people. Despite what appears to be a new lead, one question will always haunt investigators and families: Why didn’t Flight 370’s emergency location transmitter work? The airplane’s ELT never sent a distress signal to satellites, which fueled speculation and further questions. Could the plane have landed intact? Did a computer hacker disable it? Was the ELT destroyed on impact? These are questions that will not be easy to answer — if answers do ever come. But researchers’ work at Langley, perhaps, will lead to fewer such unresolved questions and more lives saved.