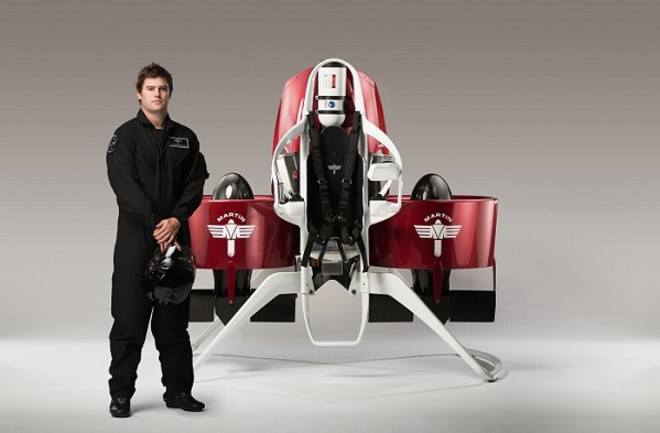 The latest prototype jetpack. Courtesy Martin Aircraft It's not nearly as sleek as the backpack-sized jetpacks that generations of sci-fi fans have lusted after. But the personal jetpack designed by Martin Aircraft has a crucial leg up on those designs: it exists in real life. The company announced Tuesday that its prototype jetpack had been approved for manned test flights in New Zealand, where the developers are based. If testing goes according to plan, the inventors hope to have a specialized version available for sale to emergency first-responders by 2014, and a stripped-down version available to the general public by 2015.

The jetpack consists of a frame flanked by two cylinders containing propulsion fans, which are powered by gasoline. The frame straps around the pilot's back, and she steers the jetpack with two joysticks. The latest model, the P12, can reportedly climb more than half a mile and travel at a speed of about 43 mph. But don't give up your wheels just yet: When they eventually go on sale, the personal flying machines are estimated to cost $150,000-$200,000. Each.

Earlier this year, the P12 was flown unmanned and remotely controlled, with ballast onboard to replicate the pilot's weight. http://www.youtube.com/watch?feature=player_embedded&v=SYM0Fcbbg1Q#at=64 The forthcoming manned tests come with pretty stringent safety standards, reports AFP:

It said the test flights would be subject to strict safety requirements, with flights not allowed any higher than 20 feet above the ground or 25 feet above water. The flights are also limited to test areas over uninhabited land.