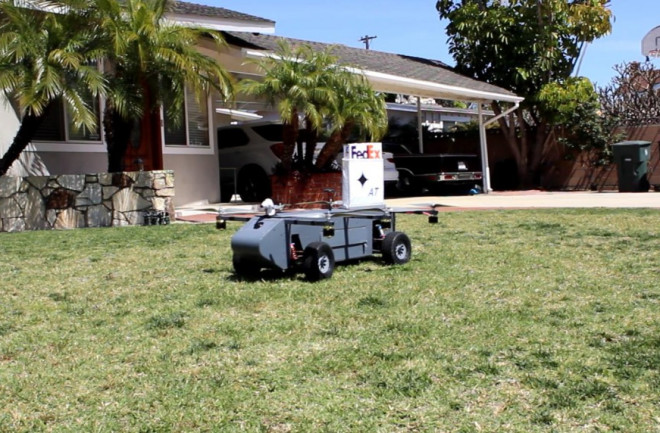 A Panther drone en route during a delivery trial run. Credit: Advanced Tactics Inc. A four-wheeled drone's first aerial package delivery test showed off a special touch by also driving up to the doorstep of its pretend customer. That capability to deliver by both air and land makes the Panther drone an unusual competitor in the crowded drone delivery space. But the drone's limited delivery range may pose a challenge in competing against the delivery drones of Google and Amazon. Unlike most delivery drones designed purely for flight, the Panther drone resembles a four-wheeled robot with six rotors extending out from its sides. That design leverages the earlier "flying car" development efforts of Advanced Tactics Inc., a company based in Southern California. Previously, Advanced Tactics spent time developing its "Black Knight Transformer" flying car with U.S. military missions in mind. The Panther drone appears to be a miniaturized version of the larger Transformer with commercial drone delivery as one of several new possible roles. "The Panther can fly at over 70 mph and has a flight time with a five-pound package of well over six minutes," says Don Shaw, CEO of Advanced Tactics Inc. "With a two-pound package and larger battery it can fly well over nine minutes." https://www.youtube.com/watch?v=GCeZcdE38MI

The good news for the Panther's delivery drone aspirations is that its versatility could make it easier to deliver packages. Delivery drones will eventually face the challenge of navigating neighborhoods with obstacles such as trees and power lines. In addition, drone developers must figure out how the drones will safely deliver packages into the hands of customers without risking any drone-on-human accidents. Some delivery drone efforts such as Google's Project Wing have attempted workaround solutions such as lowering burrito deliveries to the ground with a cable. By comparison, the Panther could simply land in any open area—such as on a local road—and then drive to the doorstep of customers. It could even drive inside the doorways of businesses or access warehouses through their loading bays. But air and ground versatility may have come at the cost of delivery range. That is because the ground mobility drivetrain adds extra weight that the Panther drone must expend battery power on lifting whenever it flies through the air. A future version of the Panther drone with a robotic arm to handle packages could potentially be heavier and shorten the delivery range even more. (On the other hand, Shaw pointed out that the drone can drive for hours on the ground at up to five miles per hour.) The Panther carrying a five-pound package has a delivery radius of somewhat over four miles, Shaw says. That falls short of Amazon Prime Air's goal of having drones deliver five-pound packages within a 10-mile radius. In 2015, Amazon unveiled a delivery drone with a 15-mile range, which translates into a 7.5-mile delivery radius. Another delivery drone made by the Nevada-based startup Flirtey can manage a five-mile delivery radius while carrying 5.5 pounds. Still, Advanced Tactics got to flex its engineering chops and use some "real out of the box thinking" in making a hybrid ground-air vehicle, Shaw explains. The company had to combine the flight capability and controls of a multi-copter drone with the power and control requirements of the ground mobility drivetrain. "One thing that many people do not understand is that the small size and heavy payload of this vehicle required much more design consideration than any other drone on the market today," Shaw says.

The Panther drone can already autonomously take off, follow predesignated waypoints and land all on its own. An operator using a laptop computer, flight controller and first person video (FPV) goggles can set flight waypoints and always manually take over the controls during autonomous flight mode. Once the Panther drone lands, it currently relies upon the human operator to remotely drive it to its final destination. But Advanced Tactics plans to upgrade the system so that it can drive autonomously to the destination and automatically deliver its package (possibly by robotic arm). The Panther would even feature air and ground obstacle avoidance and basically become a fully autonomous vehicle with the human operator just acting as backup, Shaw says. That upgrade is planned for the "very near future." https://www.youtube.com/watch?v=8MnCJZy77b0&feature=youtu.be The company is currently offering the Panther drone for sale at $2,495 until April 5th, 2017. At that point the price goes up to around $7,995. Batteries and a battery charger cost an additional $1,498 on top of the base price for the drone. Future versions of the Panther could be upgraded with different "capability packages" such as the robotic arm, obstacle avoidance, professional cinematography, surveillance sensors and so forth, Shaw says. The Advanced Tactics team does not have any plans to start a drone delivery service on its own. But it's open to partnerships with any companies that think they could use a flying and off-roading drone. "Advanced Tactics is not having and have not had any talks with any package delivery companies, however we are very open to partnerships that may occur in the near future," Shaw says. "We would like package delivery companies to contact us if they have any interest in working together."