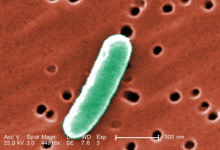 French teenagers are learning how to work with bacteria in science labs. Sound like a harmless--and even beneficial--thing, right? But because their experiments involve the genetic modification of

(E. coli) to build resistance to the antibiotic ampicillin, some French organizations are raising the alarm. One such group includes the Committee for Research & Independent Information on Genetic Engineering (CRIIGEN), which lobbies for tighter genetic engineering laws. CRIIGEN President Gilles-Eric Séralini said that he will implore France's education ministry to ban the creation of trangenic E. coli by 15- and 16-year-old students. As Nature News reports:

He warns against trivialization of a sensitive subject, contamination risks and possible violation of European directives on the manipulation of genetically modified organisms in confined spaces. "I am also concerned that practical classes erode the time spent imparting knowledge of biology," he adds.

This is the first year that French students as young as 15 years old have been taught to change DNA using plasmids--but 17- and 18-year-old students have been doing it for years. Séralini's group isn't totally opposed to genetic engineering: it just wants more restrictions in place before younger students start fiddling with bacteria. Understandably, the company that sells the E. coli teaching kits--the Association of Biology and Geology Teachers (APBG) in Lyons, France--disagrees with Séralini. Nature talked to APBG President Serge Lacassie, and reports:

Lacassie stresses that practical classes teach students how to work in sterile conditions without damaging the environment. "We need to teach science according to the realities of today — DNA is a universal language and it is useful to experience how a gene can be transferred from one organism to another. Our aim is to give students the elements to reflect about biotechnology in general," he says.

The bacteria, it should be noted, are not pathogenic and are bleached into destruction as soon as the classes end, so there's little danger of a genetically modified E. Coli strain getting loose and rampaging through France. Also, this argument isn't just about restrictions on genetic modification. As you can see in the above quotes, Séralini and Lacassie hold fundamentally different ideas about what a classroom experience should entail. One sees practical experience as a roadblock to biological knowledge, and the other sees it as a gateway to reality, proving that more than just a classroom bacterium hangs in the balance. Related Content: 80beats: Study: Evolution Education in U.S. Schools Is in a Sorry State 80beats: The Nation’s Science Report Card Is Out, and It’s Not Pretty Not Exactly Rocket Science: Eight-Year-Old Children Publish Bee Study in Royal Society Journal The Loom: The Clock That Breeds, which is made out of flashing E. coli DISCOVER: Reviews: The Wonderful World of E. Coli