One Hundred Movies on Just One Disk

How would you like to carry around your entire DVD collection on a single disk? That is the promise of a new holo­graphic digital storage technology being developed by General Electric and coming to a computer near you around 2012. Although not the first commercial holographic storage system—that honor goes to InPhase Technologies’ Tapestry™ 300r holographic drive—GE’s system could be the first one aimed at consumers. (InPhase’s holographic drives, which debuted last year, sell for $18,000 and target broadcasters who need to archive television programs.)

Holographic media can store huge amounts of data because information is encoded in layers throughout the entire disk, not just on a single reflective surface as in today’s optical media. In GE’s system, a single CD-size disk made of plastic will be able to store about 1 terabyte of data, equivalent to 110 typical movie DVDs. This kind of capacity would make it possible to back up all your music, photos, home movies, and e-mails in one place; it would also allow for totally new, extremely data-intensive applications, such as Micro­soft’s MyLifeBits project, which aims to capture in digital form every­thing that happens in an individual’s life. Besides automatically archiving and indexing things like e-mails and text documents, the project includes a wearable camera that snaps a picture at least once every 30 seconds, creating a visual index of every day. 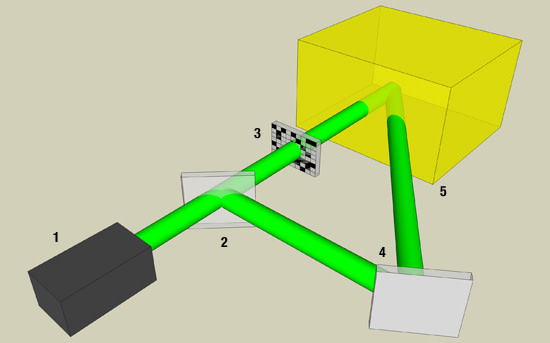 How it works To store data holographically, a laser beam (1) is split in two (2). One half of the beam passes through an array of hundreds of thousands of gates (3). Each gate can be opened or closed to represent a binary 1 or 0. The gates either block or pass the beam, filtering it into a coded pattern, or signal. The other half of the beam, known as the reference beam, is bounced off a mirror (4), so that the reference beam and the signal beam encoded with digital information intersect somewhere within the plastic storage medium (5). Light waves from the two beams interfere with each other, imprinting into the plastic a hologram—a three-dimensional pattern. By varying the angle of the mirror, millions of holograms can be created in the same piece of plastic. To read data from storage, the reference beam alone is used to illuminate the hologram. The resulting image can be read by a sensor and converted back into 1s and 0s. 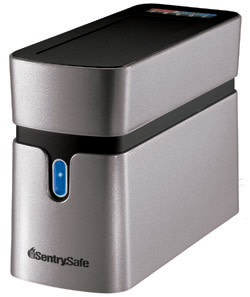 Fire-safe and waterproof hard drive from SentrySafe (pictured; $339.99) This 160-GB hard drive will back up your critical data even in the event of fire or flood.

Litoholo Hologram Kit ($139) Make your own holograms with this all-inclusive set. Instant film means none of the messy chemicals found in other kits.