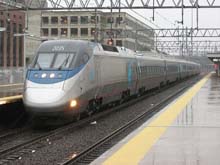 Fresh off the President's State of the Union call to extend high speed rail to 80 percent of Americans, the Obama administration trotted out its chief train enthusiast to propose a shot in the arm to rail development. From 30th Street Station in Philadelphia yesterday, Vice President Joe Biden proposed a $53 billion plan to build high-speed rail lines all around the country.

"In a global economy, we can't forget that infrastructure is also the veins and the arteries of commerce," Mr. Biden said. He frequently travels between his home state of Delaware and Washington on Amtrak trains. [Wall Street Journal]

Biden says $8 billion of that will be included in the President's budget proposal set to go to Congress next week. The rest would be parceled out over the course of six years.

Advocates say U.S. investment in high-speed rail lags many other countries and point to China, which plans to invest $451 billion to $602 billion in its high-speed rail network between 2011 and 2015, according to the China Securities Journal. [Reuters]

spending will have a hard time getting through the newly installed Republican majority in the House. The federal government would also have to grapple with Republican governors in states where this rail infrastructure would be built, who often pride themselves on symbolic opposition to such spending. Wisconsin and Ohio's governors recently refused federal rail money, and New Jersey's Chris Christie canceled the ARC Tunnel project

, which was intended to improve the overloaded connections used by people commuting from New Jersey to New York. This week rail enthusiasts struck back, first with an Amtrak proposal to take over the ARC tunnel pathway

and complete the new connection to Manhattan, and now with Biden's funding proposal.

The White House has argued that, as the economy slowly recovers, it is too early to press the brakes on all spending. "We all agree we need to cut spending to get the deficit under control," Mr. Biden said. However, he added, "When it comes to jobs, there are three key places where we cannot compromise. We cannot compromise on education, innovation or infrastructure." [Wall Street Journal]

Once again, though, the question remains what to fund where. Another conservative critique of rail funding is that it ought to be focused on the heavily traveled Northeast Corridor line

from Boston to Washington, D.C., which could definitely use a little help. But, as evidenced by Obama's stated goal of expanding high speed rail availability to most Americans, his administration is thinking about infrastructure in the much larger picture. One big goal is putting up the money to actually build the much-ballyhooed California rail line from the Bay Area to Los Angeles.

Already armed with $9 billion in state bonds and about $3.6 billion from the federal government, the influx of the new federal grants could put California about two-thirds of the way toward funding the entire project. The state hopes to leverage the public funding to bankroll the rest of the project through the private sector and local governments, in time to start speeding bullet trains between the Bay Area and Southern California by 2020. [San Jose Mercury News]

Related Content: DISCOVER: The Numbers on Railways, from Amtrak to China

80beats: “Road Train” Technology Could Let You Doze in the Driver’s Seat