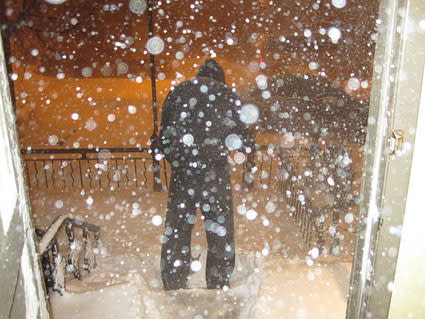 While many East Coast residents were snowed in or stranded far from home after this Boxing Day's blizzard, one man was on a mission. Reaching out through his Twitter account (where he has more than a million followers), Newark, New Jersey mayor Cory Booker rallied his troops of plows and shovelers to the places they were needed most. A few examples from TIME's article on Booker's heroic efforts:

"Just doug [sic] a car out on Springfield Ave and broke the cardinal rule: 'Lift with your Knees!!' I think I left part of my back back there," he reported in one message. One person let Booker know, via Twitter, that the snowy streets were preventing his sister from buying diapers. About an hour later, Booker was at the sister's door, diapers in hand.

His city of Newark, known mostly by outsiders for its airport, was hit with over two feet of snow on the night of December 26th. The blizzard, the first of its kind this winter, took down most of the East Coast. Many areas are still recovering from the mess, and many travelers are still stranded. But if you were snowed in in Newark, you were in luck. Booker (who tweets at @CoryBooker

) made the rounds digging out cars, sleeping little, and helping out by personally responding to both questions and calls for help from his Twitter followers. Booker isn't afraid to go out there and do the dirty work himself, he told TIME

"This is one of those times you're just pushing," Booker told TIME while riding around Newark early Tuesday evening, anxiously awaiting a Twitter response from a Newark resident who said her 82-year-old grandmother was shut in by snow. A few minutes earlier, Booker, who played football at Stanford, helped dig out a New Jersey transit bus. "It's an endurance test."

Don't you wish your mayor would bring you diapers, or plow your street so you could go to work today (OK, maybe not that last one)? Related Content: Discoblog: Say Nyet to Snow! Moscow Mayor Plans to Engineer the Weather

Discoblog: Who Says Being Snowed in Is No Fun? There’s Always Online Adultery